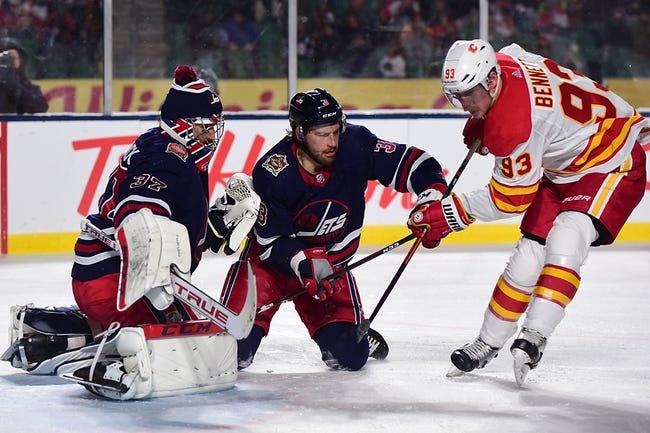 The Calgary Flames and the Winnipeg Jets meet in NHL action from Bell MTS Place on Thursday night.

The Calgary Flames will look to take another step forward after finishing 2019-20 with a 36-27-7 record, good for 4th in the Pacific division and 8th in the Western Conference, helping Calgary clinch a playoff spot and following that up with a series win in the qualifying round over Minnesota while using that to take down these same Winnipeg Jets in the qualifying round before falling to Dallas in the first round of the playoffs, losing to the Stars in six games. The Flames this year will look a bit different, as Calgary cut bait with Cam Talbot, Erik Gustafsson, Travis Hamonic and TJ Brodie and replaced them with Jacob Markstrom, Chris Tanev, Josh Leivo and Dominik Simon all coming in to fill the voids left behind. Markstrom and David Rittich are expected to form the tandem for Calgary this season in goal and only time will tell if Calgary figured out the formula to get back to the playoffs once again in 2021.

The Winnipeg Jets also have motivation coming into this game, finishing last season as the #9 seed, but with the expanded playoffs, the Jets found their way into the knockout rounds, but the stay was short-lived for the ‘Peg as these same Calgary Flames knocked out Winnipeg in the qualifying rounds. The Jets got rid of Dmitry Kulikov, Cody Eakin and Mark Letestu, but replaced them with steps up like Paul Stastny and Nate Thompson to add some grit and power to this forward group. Kyle Connor and Mark Scheifele are both back after leading the Jets with 73 points, with Connor posting 38 goals while Scheifele had a team-high 44 assists. Blake Wheeler and Patrik Laine each had 60+ points while Nik Ehlers had 58 points for the Jets last year. Connor Hellebuyck is expected back to lead the Jets in goal after posting 31 wins and a 2.57 GAA with a  .922 save percentage last season.

This is going to be a great game, but the thing here is that this is the only game on the board for opening night where the two teams met in the qualifying round and I am willing to bet that Winnipeg hasn’t forgotten that it was Calgary that sent them packing early. Calgary’s a solid team, but I feel that Winnipeg had the greater improvement in the offseason and I just think that Winnipeg at home has to be the play here.