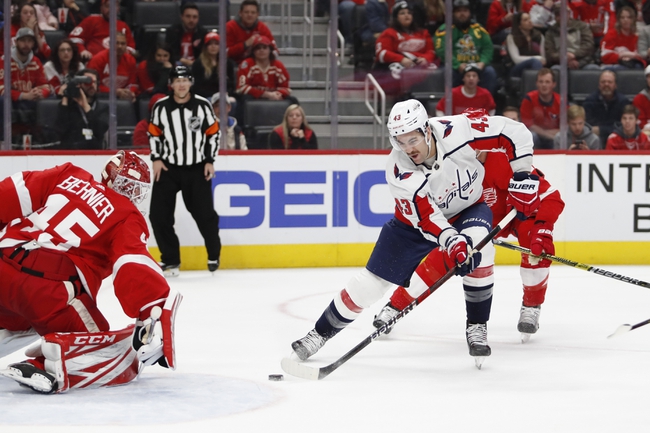 Where to Watch: FS-Detroit, NBCS-Washington Stream live sports and exclusive originals on ESPN+. Sign up now!

The Detroit Red Wings and the Washington Capitals meet in NHL action from the Capital One Arena on Thursday night.

The Detroit Red Wings will look to rebound from a 5-2 loss to Carolina last time out. Christoffer En and Tyler Bertuzzi ended up as the lone goal scorers for Detroit in the loss while Darren Helm, Filip Hronek, Madison Bowey and Anthony Mantha each had an assist with Mantha, Bertuzzi and Dylan Larkin each logging a team-high 4 shots on goal in the loss. Jonathan Bernier took the loss, falling to 15-22-3 on the year after allowing all 5 goals on 36 shots faced in the losing effort.

The Washington Capitals will look to rebound from a 3-2 shootout loss to the Buffalo Sabres last time out. Alex Ovechkin had a goal and assist with his team-high 5 shots on goal while Dmitry Orlov had the other Washington goal. Tom Wilson and Evgeny Kuznetsov each had assists as well in the loss while Michal Kempny and Ilya Kovalchuk each had 5 shots on goal in the losing effort. Braden Holtby took the loss, falling to 25-14-6 on the year after giving up a pair of goals on 26 shots faced in regulation and OT.

Washington is and should be pretty heavily favored here, as the Caps are the far better team. However, Washington hasn’t been all that great in their last ten games, playing sub-.500 hockey and I’m not laying this kind of insane number at that point. Detroit’s had their moments lately, but the Red Wings are always likely to put up a clunker. The Red Wings have had a tendency to score the opening goal as of late, so I’ll take a shot with Detroit on the puck line to start out with a goal and we’re getting a pretty good price on it. I’ll also side with the over as I see quite a few goals coming here, somewhere along the line of 4-3 or 5-4.