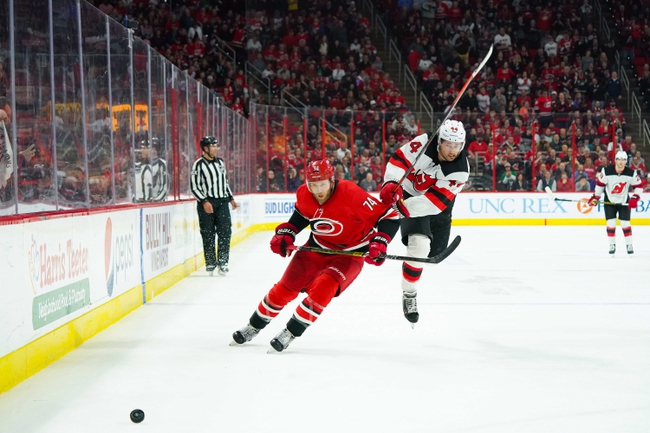 The Carolina Hurricanes and the New Jersey Devils meet in a Metropolitan division clash in NHL action from the Prudential Center on Thursday night.

The Carolina Hurricanes will look to add to their current three-game winning streak after a 5-2 win over Detroit last time out. Sebastian Aho led the way with two goals and an assist while Nino Niederreiter, Justin Williams and Morgan Geekie all put goals on the board as well for the ‘Canes in the win. Jake Gardiner had 3 assists and Teuvo Teravainen had a pair of assists as well in the victory for Carolina. Petr Mrazek picked up the win in goal to improve his record to 21-16-2 on the year after stopping 23 of 25 shots faced in the winning effort.

The New Jersey Devils will look to rebound from a 5-2 loss to Pittsburgh in their last outing. Nikita Gusev and Miles Wood each had a goal while Pavel Zacha, Nico Hischier and P.K. Subban each had an assist with Hischier logging a team-high 5 shots on target in the winning effort for the Devils. MacKenzie Blackwood ended up with the loss in goal, watching his record fall back to 22-14-8 on the year after giving up 4 goals on 32 shots faced in the losing effort.

I get that the Devils have had a lot of success against the Hurricanes at home and the Devils had really been stepping up their play before the loss to Pittsburgh. However, Carolina’s woken up from their slump and the goaltending appears to finally be getting healthy again. The Hurricanes are just rolling right now and I just think that New Jersey is in a bad spot getting in front of them right now. I’ll side with Carolina on the puck line for some extra value here.