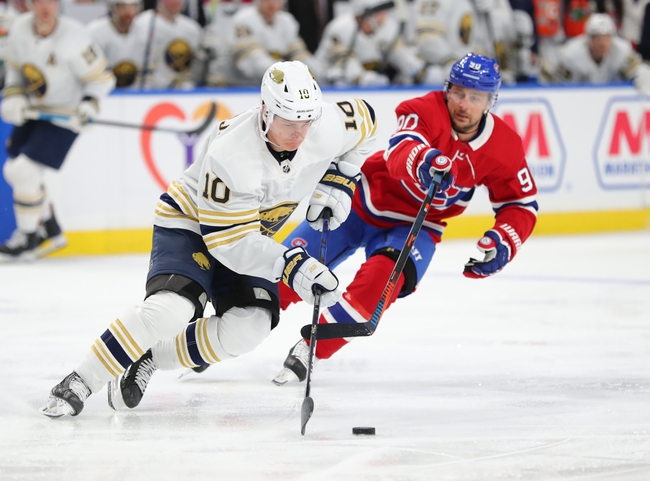 The Buffalo Sabres and the Montreal Canadiens meet in an Atlantic division matchup in NHL action from the Bell Centre on Thursday night.

The Buffalo Sabres will look to build on a 3-2 shootout win over the Washington Capitals in their last outing. Victor Olofsson and Jack Eichel each got on the scoreboard for the Sabres with Eichel logging a team-high 4 shots on goal. Rasmus Dahlin added a pair of assists while Marcus Johansson and Rasmus Ristolainen each had an assist as well in the victory. Dominik Kahun also potted the shootout winner for his new club in round 7 of the shootout. Linus Ullmark got the win in goal to improve to 17-14-3 on the year after stopping 33 of 35 shots faced in regulation and OT as well as 6 of 7 shots faced in the shootout.

The Montreal Canadiens will be out to snap a three-game losing skid after a 4-2 loss to Nashville last time out. Lukas Vejdemo and Artturi Lehkonen each had a goal for the Habs with Lehkonen, Joel Armia and Jordan Weal each having a team-high 4 shots on target. Nick Suzuki, Dale Weise, Jake Evans and Xavier Ouellet each had a helper for Montreal in the defeat. Carey Price took the loss between the pipes, falling to 27-25-6 on the year after allowing all 4 goals on 36 shots faced in the losing effort.

If you can stomach picking a side in this game, you’re much braver than I am. However, I’ve said time and time again and it’s paid off more often than not, that Buffalo on the road is fade material every time it shows up on the board and here is no different. It’s pretty much put up or shut up time for the Habs as Montreal’s time is running out to make up ground in the playoff race. I’ll lay the juice with Montreal in what’s essentially a must-win spot for the Canadiens.