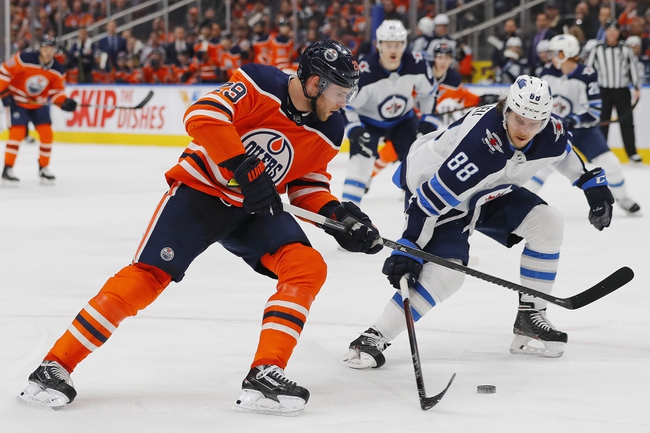 The Winnipeg Jets and the Edmonton Oilers meet in NHL action from Rogers Place on Wednesday night.

The Winnipeg Jets will look to build on a 4-2 win over the Arizona Coyotes in their last outing, pushing their winning streak to three games in the process. Nikolaj Ehlers led the Jets with 3 points coming on a goal and two assists while Tucker Poolman and Cody Eakin each had a goal and an assist. Mark Scheifele had a goal as well while Patrik Laine, Nathan Beaulieu, Blake Wheeler and Andrew Copp each had an assist in the victory. Scheifele led the Jets with 6 shots on goal while Neal Pionk and Kyle Connor each had 4 shots on goal in the win. Connor Hellebuyck got the win to improve to 30-21-5 on the year after stopping 36 of 38 shots faced in the winning effort.

The Edmonton Oilers will look to rebound from a 3-2 overtime loss to Vegas in their last outing. Alex Chiasson and Ryan Nugent-Hopkins each had a goal with Nugent-Hopkins leading the Oilers in the loss with 4 shots on goal. James Neal, Kailer Yamamoto and Oscar Klefbom each had an assist while Klefbom and Andreas Athanasiou each had 3 shots on target in the defeat for the Oilers. Mikko Koskinen ended up with the loss, falling to 18-13-3 on the year after giving up all 3 goals on 48 shots faced in the losing effort.

Head-to-head, Winnipeg is 6-2 in the last 8 meetings between these two teams.

I get the Oilers being favored at home, but for me, the Jets are playing the better hockey over the last week or so, come in riding a three-game winning streak and have had the bulk of the success against the Oilers in recent meetings. The Oilers are also quite a ways into the division spots while Winnipeg is trying to claw out wins to keep pace and hold onto one of the Wild Card spots in the Western Conference. I just think there’s a lot at stake here for Winnipeg, so I’ll side with the Jets and the plus money in this one.