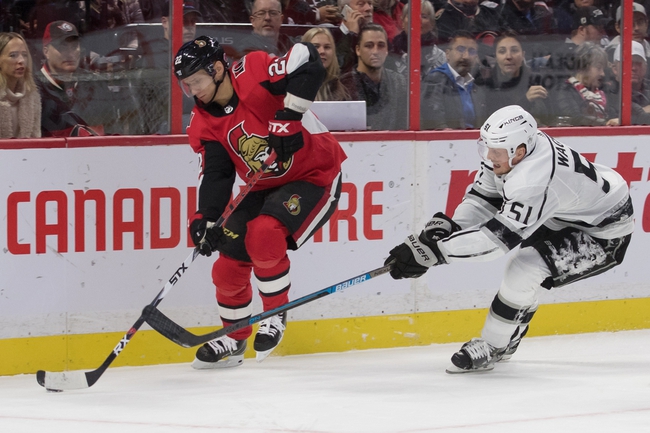 The Ottawa Senators and the Los Angeles Kings meet in NHL action from the Staples Center on Wednesday night.

The Ottawa Senators come into this game on the heels of a 5-2 loss to the Anaheim Ducks in their last outing. Colin White and Brady Tkachuk led the charge for Ottawa with a goal and an assist each while Thomas Chabot and Connor Brown each had a helper as well. Bobby Ryan and Jayce Hawryluk each had a team-high 5 shots on goal while Tkachuk had 4 shots on goal of his own in the losing effort. Marcus Hogberg took the loss, falling to 5-8-8 on the year after allowing all 5 goals on 15 shots faced in the losing effort.

The Los Angeles Kings will try to build on their current six-game winning streak after a 3-1 win over Colorado in their last outing. Mikey Anderson, Alex Iafallo and Austin Wagner each had a goal while Ben Hutton had an assist and a team-high 4 shots on target. Blake Lizotte also had 4 shots on goal as well in the victory for the Kings. Jonathan Quick picked up the win for the Kings, improving his record to 16-22-4 on the year after allowing the lone goals on 22 shots faced in the winning effort.

Just when I think it’s safe to go in the water and take a rare flyer on the Senators, Ottawa remembers who they are and put up another clunker on the road. I mean it’s bad enough, but when you outshoot a team 42-15 and still lose 5-2? 5 goals on just 15 shots? That’s bad. Los Angeles saved their best play of the season for last, when they were well out of the playoff race, but the fact here is that while the price isn’t all that great, the Kings are playing heads and shoulders better hockey than the Senators are and are at home as well. I’ll side with the Kings to get the job done in regulation to get a more favorable price on the wager.