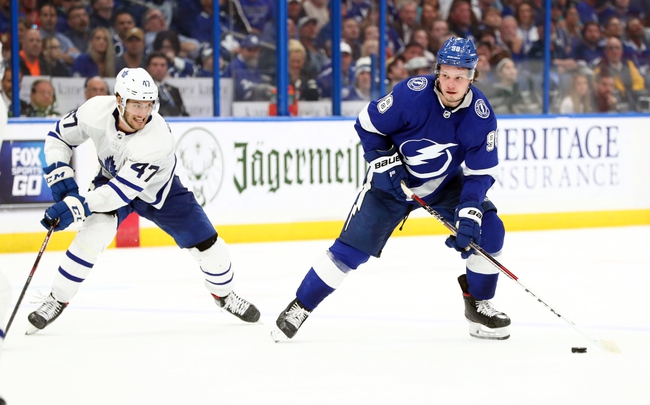 The Tampa Bay Lightning and the Toronto Maple Leafs meet a high-profile Atlantic division matchup in NHL action from the Scotiabank Arena on Tuesday night.

The Tampa Bay Lightning will try to rebound from a 5-4 shootout loss to Detroit last time out. Brayden Point led the Bolts with a pair of goals while Patrick Maroon and Carter Verhaeghe each had a goal as well in the losing effort. Yanni Gourde added a pair of assists while Luke Schenn, Tyler Johnson and Nikita Kucherov each had an assist as well, with Kucherov leading the Bolts with 8 shots on goal in the loss. Alex Killorn came 2nd on the Lightning with 6 shots on goal and Ondrej Palat had 4 shots on target. Curtis McElhinney got the OT loss, falling to 8-6-1 on the year after allowing 4 goals on 28 shots faced in regulation and OT.

The Toronto Maple Leafs will be out to snap a three-game losing skid after a 2-1 loss to Anaheim in their last outing. William Nylander’s unassisted 3rd period goal was the lone damage that the Leafs would do on the scoreboard as Nylander and John Tavares each had 5 shots on goal while Auston Matthews had 4 shots on target and Mitch Marner and Kasperi Kapanen each had 3 shots on goal. Toronto outshot the Ducks 15-2 in the 3rd period, but it was too little too late as Anaheim would carry the two goals to victory and send Toronto back empty-handed again. Jack Campbell took the loss, falling to 11-12-3 on the year after allowing both goals on 26 shots faced in the losing effort.

You have to imagine that Tampa Bay will want some revenge after Toronto came to Tampa just a couple of weeks ago and stole a win on the road. However, Toronto has the Florida Panthers hot on their heels for the 3rd spot in the Atlantic division right now, and Toronto will want to get the bad taste out of their mouths after picking up just one point from a possible six on a winnable west coast road trip, as dropping those 5 points is huge in the grand scheme of things in the playoff picture. I just think this game means a whole lot more to Toronto than it does Tampa Bay, so I’ll take my shot with the Leafs at home here.