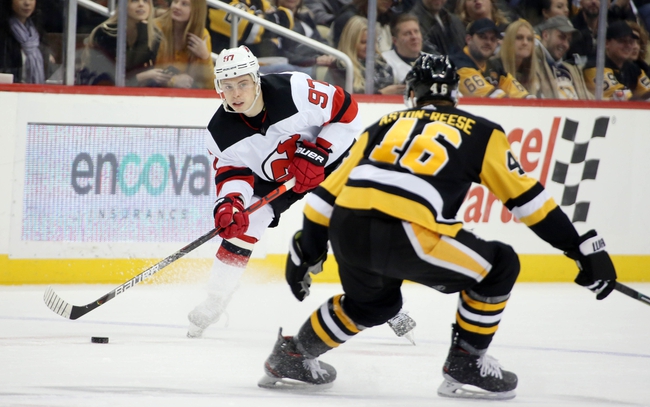 Where to Watch: ATT-Pitt, MSG+ Stream live sports and exclusive originals on ESPN+. Sign up now!

The Pittsburgh Penguins and the New Jersey Devils meet in NHL action from the Prudential Center on Tuesday night.

The Pittsburgh Penguins will be out to rebound from back-to-back losses after a 6-2 loss to Carolina last time out. Evgeni Malkin and Patrick Marleau were the goal-scorers for the Penguins in the losing effort while Conor Sheary, Justin Schultz and Bryan Rusy each had a goal. Patric Hornqvist led the Pens with 5 shots on goal while Jared McCann and Kris Letang each had 3 shots on target as well in the losing effort. Tristan Jarry took the loss, falling to 20-12-1 on the year after allowing all 6 goals on 36 shots faced in the losing effort.

The New Jersey Devils will try to build on back-to-back wins after picking up a 6-4 win over the New York Rangers in their last outing. Kyle Palmieri and Travis Zajac each had two goals while Frederik Claesson and John Hayden each had a goal as well to make up the scoring output for the Devils in the win. Damon Severson and Dakota Mermis each had two assists as well while Kevin Rooney led the Devils with 4 shots on goal in the victory. MacKenzie Blackwood got the win to improve to 22-13-8 on the year after stopping 31 of the 35 shots faced in the winning effort.

This line just feels weird to me. Yes, the Penguins are the better team and the only team that has the potential to make the playoffs this season. However, I’m not laying this kind of juice with a Pittsburgh team that can’t buy a win as of late against a New Jersey team that’s winning games more often than not and are looking like the team that we expected to see at the beginning of the season. The Devils have also been a thorn in the side of the Penguins for some time now, so I’ll take a stab at New Jersey and the decent-sized plus money here.