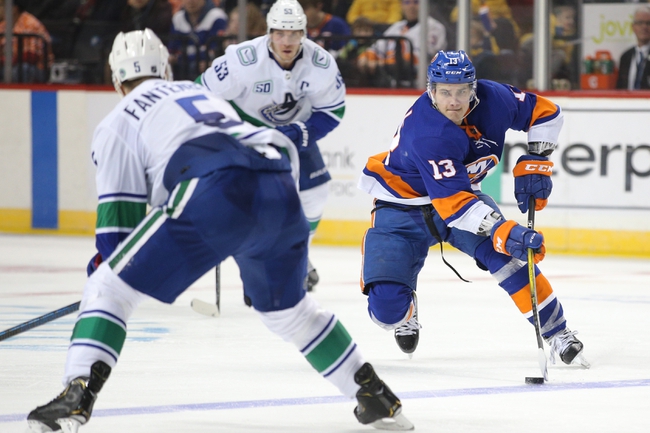 Where to Watch: SN-Pacific, MSG+ Stream live sports and exclusive originals on ESPN+. Sign up now!

The New York Islanders and the Vancouver Canucks meet in NHL action from the Rogers Arena on Tuesday night.

The New York Islanders will be out to snap a six-game losing streak after a 3-2 overtime loss to the Carolina Hurricanes last time out. Ryan Pulock and Josh Bailey each had a goal for the Isles while Noah Dobson, Anders Lee and Andy Greene each had an assist in the defeat. Pulock, Lee, Mathew Barzal and Devon Toews each had a team-high 4 shots on goal as well as the Islanders were outshot 28-26 in the game but outshot Carolina 11-7 in the 3rd period. Thomas Greiss ended up with the OT loss, falling to 16-9-4 on the year after allowing all 3 goals on 28 shots faced in the losing effort.

The Vancouver Canucks will look to rebound from a 2-1 loss to Vancouver in their last outing. Elias Pettersson’s 3rd-period tally wouldn’t be enough to get the Canucks back in the game despite outshooting Columbus 27-22 in the game as the Blue Jackets rode a pair of 2nd period goals to victory. Oscar Fantenberg and Brandon Sutter each had an assist while Tyler Toffoli had a team-high 5 shots on goal. Tanner Pearson, Jake Virtanen and Alex Edler each had 3 shots on goal as well in the defeat. Thatcher Demko took the loss, falling to 12-10-2 on the year after allowing both goals on 22 shots faced in the losing effort.

Both of these teams have been disappointing for me lately, but truth be told, I’m done with the Islanders, as I can’t figure out what this team is doing and it’s coming at the worst possible time. Vancouver’s at least played their best hockey this season at home, and the Canucks need to figure things out as Vancouver has a tough back-to-back against Arizona and Colorado later in the week that will be huge in the Pacific playoff picture. I just think that the Canucks need this win more and at home I think that’s the edge to get the job done. I’ll lay the juice with Vancouver at home here.