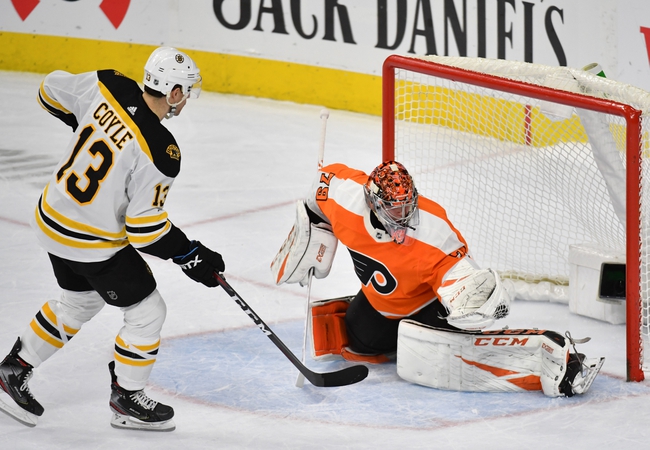 The Boston Bruins and the Philadelphia Flyers meet in NHL action from the Wells Fargo Center on Tuesday night.

The Boston Bruins will look to rebound from a 5-3 loss to the Tampa Bay Lightning in their last outing. Charlie McAvoy led the B’s with a goal and an assist while Sean Kuraly and David Pastrnak each had a goal with Kuraly logging 5 shots on goal compared to Pastrnak’s 6 shots on target. Patrice Bergeron also had 5 shots on goal while Jake DeBrusk had 4 shots on goal in the defeat. Tuukka Rask ended up with the loss, falling to 25-8-6 on the year after allowing 4 goals on 24 shots faced in the losing effort.

The Philadelphia Flyers will look to build on a nine-game winning streak after a 3-1 win over the Buffalo Sabres last time out. Claude Giroux led the Flyers with a pair of goals while Joel Farabee added the 3rd tally for the Flyers in the win. Travis Sanheim and Jakub Voracek each had a pair of assists as well for the Flyers in victory. Sean Couturier led the Flyers with 5 shots on goal while Farabee, Voracek and Travis Konecny each had 3 shots on goal. Carter Hart got the win to improve to 24-12-3 on the year after stopping 38 of 39 shots faced in the winning effort.

Part of me considered Boston as the Bruins are still the best team in the league points-wise and Boston has been dangerous on the road. However, we’re getting a cheaper price with a white-hot Flyers team that’s won nine straight games and have fired themselves into the thick of the Metropolitan division playoff picture and if they play their cards right, Philly could win the division over the last couple of weeks in the regular season. I’m also expecting Carter Hart to get the nod here in the high-stakes game and he’s not a goaltender I’m trying to fade at home, going 20-2-2 at home this season with a 1.61 goals against average and a .944 save percentage. I think this is a game that the Flyers can use to make a statement to the rest of the league, so I’ll side with the Flyers at home for their 10th straight win.