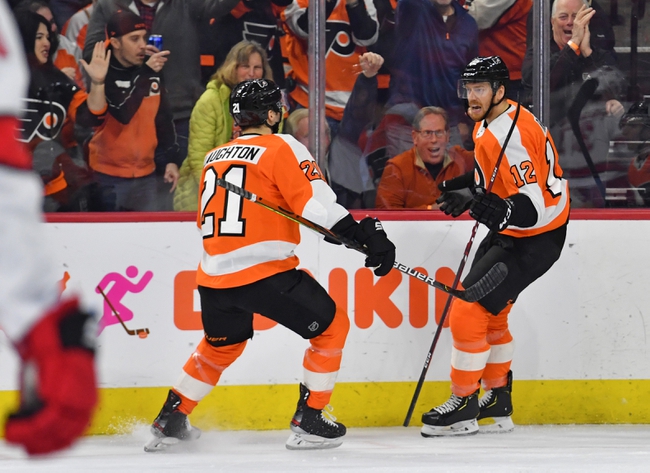 Boston’s four-game winning streak was snapped by a loss to the Lightning. The Bruins remain the favorite to hoist the cup at the end of the season.

What a way to follow up a win over the league’s best team than by losing to the league’s worst team, albeit in a shootout. Abolish the shootout!

For the first time in team history, the Blues have swept the season series over the Blackhawks. There 2-0 win over Chicago was also history for being the first all-female NHL Broadcast on National Television! You go girls!

Colorado snapped their two-game losing streak with a win over San Jose on the road. The Avs’ offense is not something to mess with right now.

The league’s hottest team, the Flyers have won nine straight games, as six of those wins were against Metro division teams.

Washington is now tied with Philadelphia for the lead in the Metro division, as the Caps picked up a big road win over the Penguins.

Vegas has won 10 out of their last 12 games, as they lead the Pacific division.

Pittsburgh has not been able to fully put their struggles behind them, as the Penguins have now lost back-to-back games, being outscored 11-4 in that stretch.

The Oilers have won four of their last five and are right behind the Golden Knights for the Pacific division lead.

Dallas has lost five straight games, including being shut-out in both sides of a home-and-home to the Nashville Predators.

Carolina has strung together two wins over Metro rivals in the Islanders and Penguins.

Columbus was able to end their West Coast trip with a big 2-1 win over the Canucks. They currently own the first wild card spot in the Eastern Conference.

The Islanders have lost six straight and are currently outside the playoff picture. This next West Coast road trip may define the rest of their season.

Calgary’s three-game win streak was snapped in a home loss to Vegas, 5-3.

The Leafs lost three games to the California teams, Ducks, Sharks, and Kings. Not a good look at all.

Here comes the Wild! Currently owning the first wild card spot, no one saw this coming from Minnesota, as they have been red hot.

The Rangers lost a big home game against the Devils, 6-4. Losses like that can prohibit a playoff spot.

The Cats took care of business at home against the Canadiens. That win snapped a four-game losing streak for Florida.

Losing five of your last six will make it near impossible to make the playoffs, even in the more feasible Western Conference.

Welcome to the playoff hunt Nashville, as the Predators swept a home-and-home against the Stars.

The Jets defense has come out of nowhere, as well as Connor Hellebuyck’s outstanding play. The Jets are right in the mix.

Arizona had won back-to-back games before losing to the Flames on the road, 3-2.

Montreal lost both games in their Florida road trip, 4-0 to the Lightning and 4-1 to the Panthers.

The Devils got two big wins over tough teams in the Blues and Rangers.

The Blackhawks have fallen off track again, with losses to the lowly Red Wings and the defending champion-Blues.

The Sabres have been really lousy as of late, losing six straight games, and not scoring more than 2 goals in any of those games.

The Ducks’ two-game win streak was snapped by a 5-4 home loss to the Wild.

Hey look at Ottawa, winners of four of their last five!

Los Angeles has played very well as of late, as the Kings have won five straight against some pretty tough teams.

The Red Wing have been eliminated from playoff contention, but that did not stop them from spoiling the hearts of Blackhawk and Lightning fans this week.