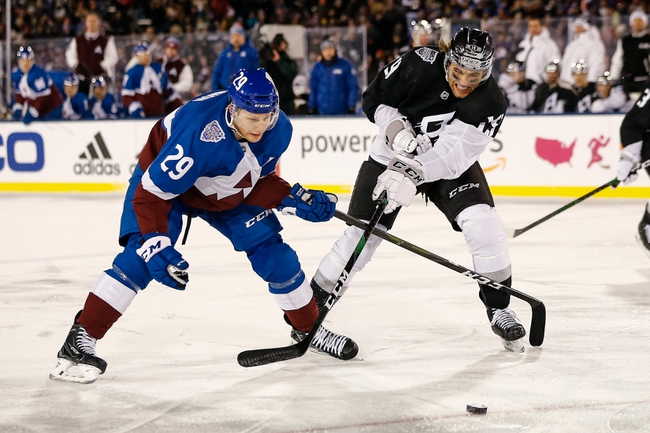 Where to Watch: Altitude2, FS-West Stream live sports and exclusive originals on ESPN+. Sign up now!

The Colorado Avalanche and the Los Angeles Kings meet in NHL action from the Staples Center on Monday night.

The Colorado Avalanche will try to build on a 4-3 win over the San Jose Sharks last time out. Gabriel Landeskog and Nathan MacKinnon each had a goal and two assists while Vladislav Namestnikov had a goal and an assist. Joonas Donskoi also got his name on the score sheet while J.T. Compher had a pair of assists and Erik Johnson had a helper as well. Pavel Francouz got the win to improve his record to 20-6-4 on the year after making 22 stops on 25 shots faced in the winning effort for the Avs.

The Los Angeles Kings will look to build on their current five-game winning streak after a 7-3 triumph after a 7-3 win over Minnesota last time out. Dustin Brown had a hat trick as part of his four-point night with 5 shots on goal while Anze Kopitar had a goal and two assists with a +5 rating. Trevor Moore, Blake Lizotte and Gabriel Vilardi each had a goal while Alex Iafallo added a pair of assists. Calvin Petersen picked up another win, improving to 4-3-0 on the year after making 25 saves on 28 shots faced in the winning effort.

Head-to-head, Colorado is 3-7 in the last 10 meetings between these two teams.

I’ve gone back and forth on this game and personally it’s probably one that I’m just going to watch rather than bet. However, while Colorado’s performed well on a back-to-back, going 6-3-1 in the second half of a back-to-back this season, the fact is that the Avs had to battle against Anaheim on Sunday and now have to face a rested and red-hot Kings team that’s figured out how to win games consistently even though it’s far too late in the year to turn it into something. Los Angeles also won the lone meeting so far this season, so just based on value, I’ll take a shot at the Kings and the plus money here.

Get Premium Picks Start Winning Now »
The pick in this article is the opinion of the writer, not a PickDawgz site consensus.
Previous Pick
Edmonton Oilers vs. Vegas Golden Knights - 3/9/20 NHL Pick, Odds, and Prediction
Next Pick
Nashville Predators at Montreal Canadiens - 3/10/20 NHL Picks and Prediction