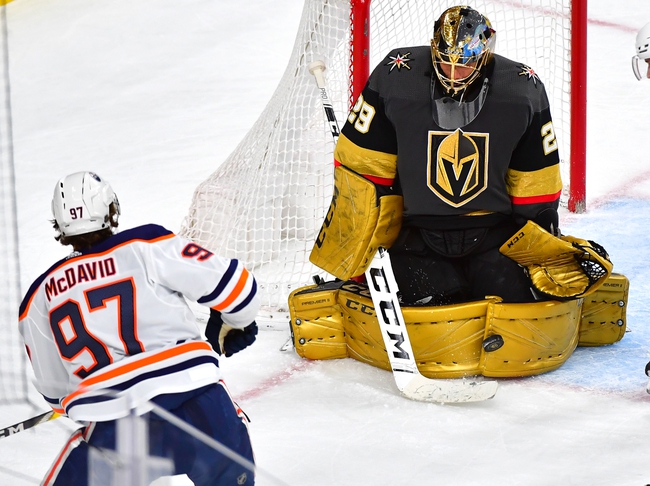 Where to Watch: SN-West, ATT-RM Stream live sports and exclusive originals on ESPN+. Sign up now!

The Vegas Golden Knights and the Edmonton Oilers meet in NHL action from Rogers Place on Monday night.

The Vegas Golden Knights come into this game looking to build on their 5-3 bounce back victory over the Calgary Flames in their last outing. Nick Holden had a goal and an assist while Max Pacioretty, Jonathan Marchessault, Shea Theodore and Tomas Nosek all got on the board for Vegas as well. William Karlsson led the Golden Knights with a pair of assists as well while the aforementioned Theodore had a team-high 5 shots on goal and Pacioretty and Nicolas Roy each had 4 shots on goal in the victory. Robin Lehner got the win to improve to 19-10-5 on the year after stopping 19 of the 22 shots faced in the winning effort.

The Edmonton Oilers will look to build on a 4-1 win over the Columbus Blue Jackets in their last outing. Alex Chiasson had a goal and an assist while Connor McDavid, Riley Sheahan and Caleb Jones all got on the score sheet for the Oilers as well in the win. It was a balanced attack for Edmonton as all but 3 Oilers who took the ice had at least one shot on goal, led by the group of Tyler Ennis, Darnell Nurse and the previously mentioned McDavid, all of whom had 3 shots on goal in the win. Mikko Koskinen got the win in goal for Edmonton, improving to 18-13-2 on the year after making a whopping 45 saves on 46 shots faced in the winning effort for the Oilers.

I get Edmonton being favored at home as the Oilers are rested and the home team’s had a lot of success in this matchup. However, Vegas has excelled in the second half of a back-to-back for quite some time now, and the Golden Knights have just been having a lot of sustained success as of late. I just think with the way Vegas has been playing lately, there’s too much value to pass on here with Vegas, so I’ll take the Golden Knights at even money for another win here.