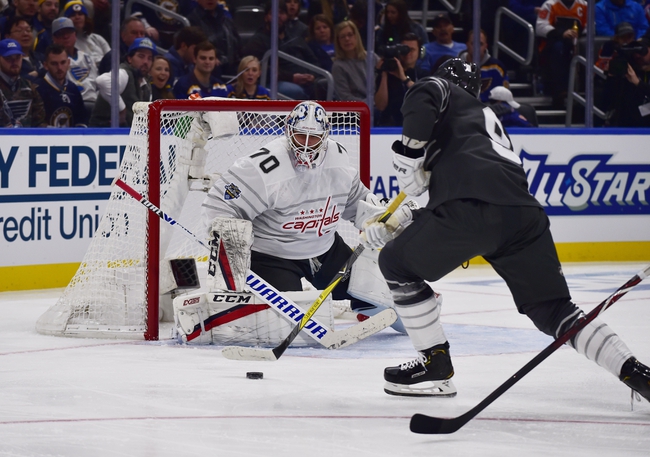 The Washington Capitals and the Buffalo Sabres meet in NHL action from the KeyBank Center on Monday night.

The Washington Capitals will look to build on a 5-2 win over the rival Pittsburgh Penguins in their last outing. Nic Dowd led the charge for the Caps with a pair of goals and an assist while Richard Paink, Nicklas Backstrom and T.J. Oshie all had a goal and an assist as well in the winning effort. Braden Holtby locked things down in the crease for the Capitals, picking up the win to improve his record to 25-14-5 on the year after stopping 26 of 28 shots faced in the victory for the Caps.

The Buffalo Sabres will be out to snap a paltry six-game losing streak after a 3-1 loss to the Philadelphia Flyers in their last outing. Dominik Kahun scored the lone goal for the Sabres while Marcus Johansson and Victor Olofsson each had an assist in the loss. Jeff Skinner and Sam Reinhart tied for the team lead with 6 shots on goal while Rasmus Dahlin came in 2nd with 4 shots on goal in the losing effort. Carter Hutton took the loss in goal for the Sabres, allowing all 3 goals on 24 shots faced to drop his record to 12-14-4 on the year in defeat.

I’m really trying to make a case for Buffalo and the plus money here as the Sabres have done their best work at home, and it’s been like that for some time now. However, the Sabres are sliding fast and are watching the losses pile up as they get closer and closer to the brink of elimination. Washington’s had their ups and downs as well, but the Capitals have been good on the road all year long and the Capitals are just the better team playing better hockey here. I’ll side with Washington here and to get some value out of the wager I’ll take Washington on the puck line.

Get Premium Picks Start Winning Now »
The pick in this article is the opinion of the writer, not a PickDawgz site consensus.
Previous Pick
NHL Power Rankings - All 31 Teams: 3/9/20
Next Pick
Winnipeg Jets vs. Arizona Coyotes - 3/9/20 NHL Pick, Odds, and Prediction