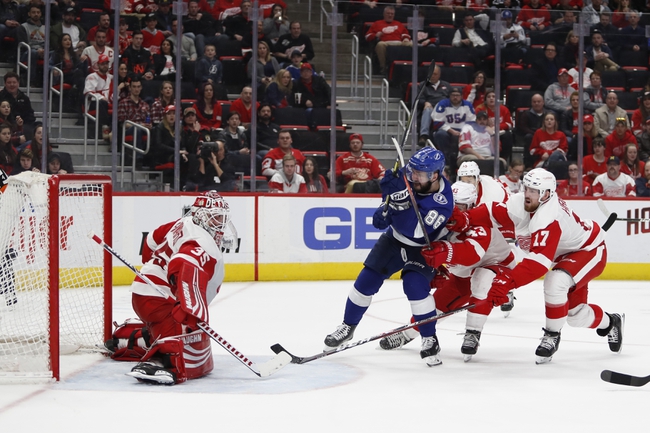 Where to Watch: FS-Detroit, SunSports Stream live sports and exclusive originals on ESPN+. Sign up now!

The Tampa Bay Lightning and the Detroit Red Wings meet in NHL action from Little Caesars Arena on Sunday.

The Tampa Bay Lightning come into this game looking to buid on back-to-back wins after a 5-3 triumph over Boston last time out. 5 different Lightning players found the score sheet, led by Mikhail Sergachev who had a goal and an assist while Cedric Paquette, Anthony Cirelli, Alex Killorn and Nikita Kucherov all had goals while Zack Bogosian, Yanni Gourde, Brayden Coburn and Brayden Point all had assists for the Bolts in the win. Andrei Vaslievskiy got the win in goal to improve to 35-13-3 on the year after stopping 35 of 38 shots faced in goal for the Lightning’s netminder.

I’ve been hard on Detroit and for good reason as the Detroit Red Wings are the worst team in hockey by far. With that said, while the Bolts are clearly the better team and have owned Detroit over the years, I’m not laying this kind of juice with a Tampa Bay team that’s playing just .500 hockey right now. Detroit’s losing games left and right, but a lot of times, Detroit’s scoring the first goal and it’s hard to chase a -1.5 or -2.5 puck line bet from behind. I’ll take a shot with Detroit on the puck line as I think the Red Wings strike first and can make Tampa Bay work hard for this win.