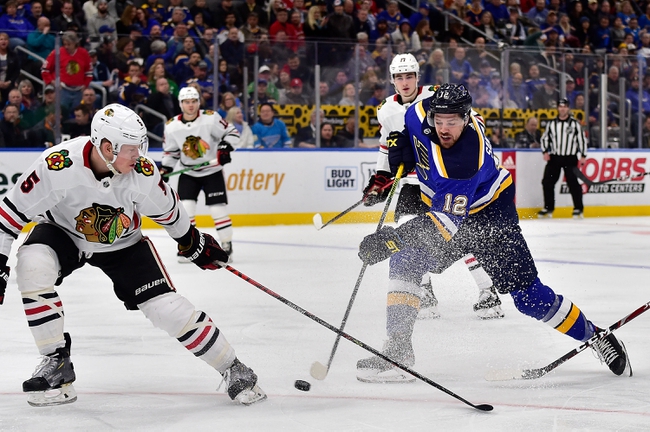 Where to Watch: FS-Midwest, NBCS-Chicago Stream live sports and exclusive originals on ESPN+. Sign up now!

The St. Louis Blues and the Chicago Blackhawks meet in a Central division clash in NHL action from the United Center on Sunday night.

The St. Louis Blues will look to rebound from a 4-2 loss to the New Jersey Devils in their last outing. Jaden Schwartz and Vince Dunn got their names in the scoring column for the Blues in the losing effort while Brayden Schenn, Tyler Bozak and Robert Thomas all had an assist as well in the defeat. Alex Pietrangelo led St. Louis in shots on goal with 5 while the aforementioned Bozak had 4 and Dunn, David Perron and Colton Parayko all had 3 shots on target in the loss. Jordan Binnington took the loss, falling to 30-12-7 on the year after allowing all 3 goals on 31 shots faced in the losing effort.

The Chicago Blackhawks will also try to bounce back after a disappointing 2-1 loss to the Detroit Red Wings in their last outing. Patrick Kane had the lone marker for the ‘Hawks, with assists going to Jonathan Toews and Brandon Saad, with Kane, Toews, Alex DeBrincat and Duncan Keith all tied for the team-high with 6 shots on goal I the losing effort. Corey Crawford ended up taking the loss between the pipes for Chicago, dropping his record to 15-19-3 on the year after allowing both goals on 25 shots faced in the losing effort.

The plus money with Chicago is tempting as the Blackhawks need this win more, sitting on the outside looking in in terms of the playoff picture, while the home team’s also had all of the recent success between the two sides. However, a loss to Detroit with so much at stake this late in the year is almost inexcusable, and while St. Louis’ loss to New Jersey isn’t much better, the Blues had been playing really well up to that point that a loss was bound to come sooner or later. All in all, even on the road, the Blues are the better team here so I’ll lay the reasonable price with St. Louis here.