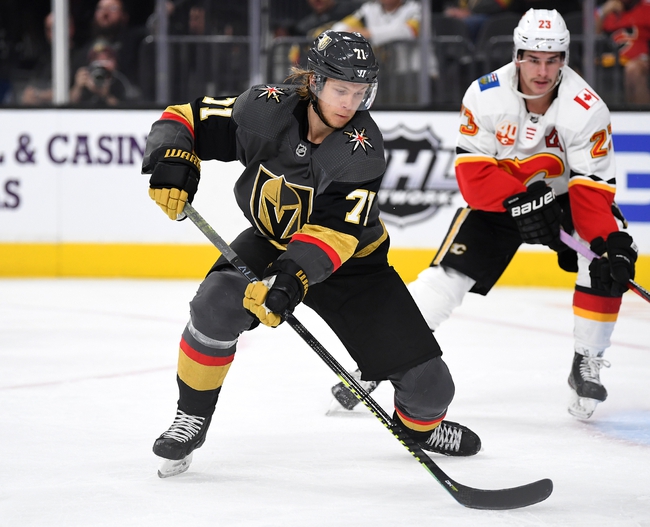 Where to Watch: Sportsnet, ATT-RM Stream live sports and exclusive originals on ESPN+. Sign up now!

The Vegas Golden Knights and the Calgary Flames meet in a Pacific division clash in NHL action from the Scotiabank Saddledome on Sunday night.

The Vegas Golden Knights will look to bounce back after having their eight-game winning streak snapped with a 4-0 loss to Winnipeg last time out. The Jets were on Vegas early and often, opening the scoring just :32 into the game as well as doubling the lead just before the five-minute mark of the opening period. The Jets added a 3rd in the 1st and a 4th in the 2nd period. Nicolas Roy led the Golden Knights in shots with 5 shots on goal while Nate Schmidt had 4 shots on goal and Paul Stastny chipped in 3 shots on target. Marc-Andre Fleury took the loss, falling to 26-16-5 on the year after allowing 4 goals on 24 shots faced in the losing effort.

The Calgary Flames will try to add to their current three-game winning streak after a 3-2 win over Arizona in their last outing. Johnny Gaudreau, Mikael Backlund and T.J. Brodie each had a goal to contribute while Matthew Tkachuk did his part by assisting on all three Calgary goals in the winning effort. Gaudreau and Elias Lindholm also tied for the team-high with 4 shots on goal in the losing effort. Cam Talbot picked up the win in goal for Calgary, stopping 32 of the 34 shots faced in the winning effort to improve his record on the year to 12-10-1 this season.

I get Vegas being favored here still riding some of the fumes from that lengthy winning streak and the Golden Knights have had a history of winning games against the Flames over the years. However, home ice has been key in this matchup, with the home team winning each of the last 9 matchups head-to-head. Calgary’s also playing well over the last week or so in their own right, and we’re getting plus/even money to take a team that’s won 3 straight. I’ll side with Calgary to add another notch to their win column.