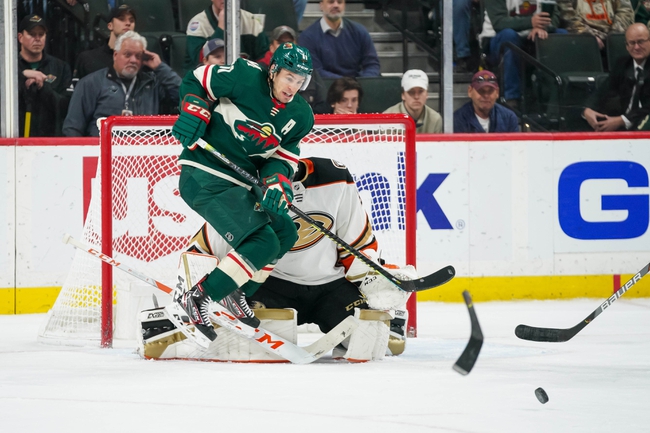 The Minnesota Wild and the Anaheim Ducks meet in NHL action from the Honda Center on Sunday night.

The Minnesota Wild come into this game looking to rebound from a 7-3 loss to the Los Angeles Kings in their last outing. Marcus Foligno led the Wild with a goal and an assist while Jared Spurgeon and Luke Kunin got their names in the scoring column for the Wild as well in defeat. Mats Zuccarello has a pair of assists while Jonas Brodin and Jared Greenway each had an assist as well in the losing effort. Alex Stalock ended up taking the loss between the pipes, falling to 20-11-4 on the year after allowing 6 goals on 34 shots faced in the losing effort.

The Anaheim Ducks enter this contest fresh off of back-to-back wins following a 2-1 win over the Toronto Maple Leafs last time out. Carter Rowney opened the scoring and Adam Henrique scored what would turn out the be the game-winning goal, while David Backes and Michael Del Zotto got on the score sheet as well with an assist each. John Gibson would pick up the win in goal, improving his record to 20-26-5 on the year after stopping all 26 shots faced in the win, but the win would come at a cost as Gibson led the game due to injury part way through the 3rd period.

I get why Anaheim would be a tempting proposition as Minnesota hasn’t played all that great on the road this season, and Anaheim’s been playing better lately, especially at home. However, Anaheim still isn’t a team I’m trying to back down the stretch as the Ducks are simply trying to play spoiler and I’m not sure how much faith I can put in the Ducks who would be relying on Ryan Miller in goal. Minnesota was playing really well before that hiccup against the Kings and I expect the Wild to get back on track with a win here.