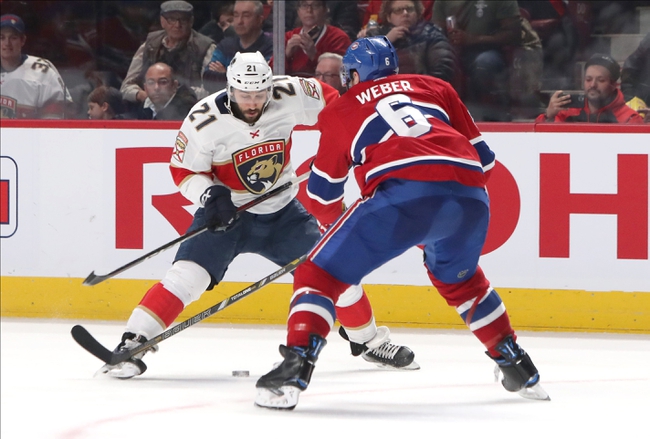 The Montreal Canadiens and the Florida Panthers tangle in an Atlantic division matchup in NHL action from the BB&T Center on Saturday night.

The Montreal Canadiens come into this game hoping for a road win to keep their slim playoff hopes alive after a 4-0 loss to the Tampa Bay Lightning in their last outing. The Lightning took the lead just :49 into the game and didn’t really look back, scoring again in the 1st as well as a late goal in both the 2nd and 3rd periods. The Habs actually outshot Tampa Bay 32-23 in the losing effort, including 24-11 over the final two periods, led by Max Domi who had 5 shots on goal and Jake Evans who had 4 shots on target followed by a slew of Canadiens who had 3 shots on goal. Carey Price took the loss, falling to 27-24-6 after giving up all 4 goals on 23 shots faced in the losing effort.

The Florida Panthers will be out to snap a four-game losing streak after a 2-1 overtime loss to the Boston Bruins in their last outing. MacKenzie Weegar had the lone goal for the Panthers early on in the 2nd period with Lucas Wallmark and Brett Connolly each receiving an assist on the play. Frank Vatrano had a team-high 4 shots on goal in the losing effort, followed by 7 different Panthers who had 3 shots on goal in the defeat. Chris Driedger took the loss, falling to 5-2-1 on the year after stopping 26 of 28 shots faced in the losing effort.

I want to be able to say that it makes sense that Florida is favored at home, but how can anyone be expected to lay juice with a Florida team that can’t win at home? I mean the Panthers are watching their playoff hopes fade after losing 8 straight on home ice, where normally you’re supposed to do your best work or at least play well. I keep backing Montreal only to be let down, but this is a winnable spot for the Habs and to get plus money to fade a team that’s lost 8 straight at home sounds good to me. Give me Montreal and the plus money here.