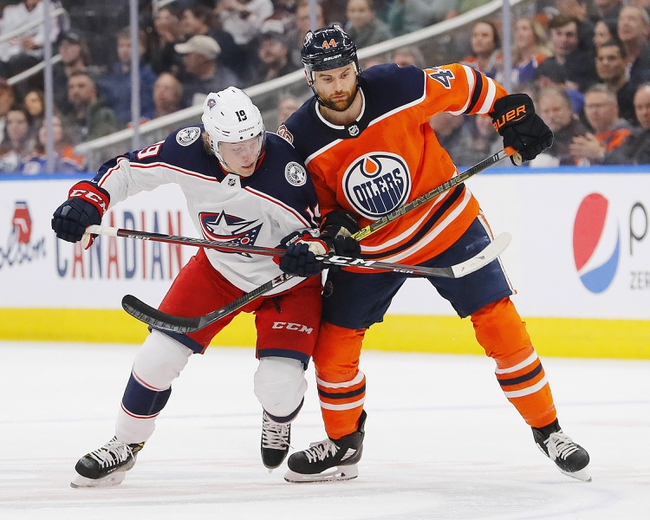 The Columbus Blue Jackets and the Edmonton Oilers meet in NHL action from Rogers Place on Saturday night.

The Columbus Blue Jackets could really use a win after a 3-2 overtime loss to Calgary last time out. The Blue Jackets did their damage in the 1st period with Devin Shore and Gustav Nyquist finding the net 2:24 apart, but that’s where the luck ran out as the Flames would tie the game at two in the 3rd and bury the overtime winner later in the extra frame. Nyquist led Columbus with 4 shots on target while Boone Jenner had 3 shots on goal in the defeat. Joonas Korpisalo took the loss, falling to 19-11-5 on the year after giving up all 3 goals on 37 shots faced in the losing effort.

The Edmonton Oilers will also be looking to rebound from a 4-3 loss to the Chicago Blackhawks in their last outing. Ryan Nugent-Hopkins had a goal and a team-high 5 shots on target, while Kailer Yamamoto and Josh Archibald each had a goal and 3 shots on target as well. Leon Draisaitl and Darnell Nurse each had a pair of assists with Draisaitl’s adding up to his league-leading point total of 110 so far this season. Mike Smith ended up with the loss in goal for the Oilers after allowing 4 goals on 21 shots to fall to 19-11-6 on the year, getting pulled in the 2nd period in the process.

The Blue Jackets and plus money are tempting as Columbus hasn’t really been getting blown out in any of these losses during this recent cold spell, it’s just some bad bounces and dumb puck luck that’s stopped the wins from coming in for Columbus. However, Edmonton’s just too good and playing too well for the most part to leave a reasonable line on the table. I’ll lay the juice with the Oilers in this spot.