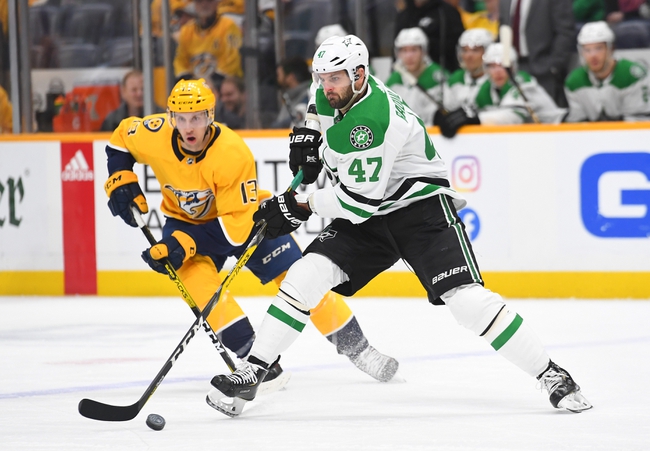 Where to Watch: FS-Southwest, FS-Tennessee Stream live sports and exclusive originals on ESPN+. Sign up now!

The Nashville Perdators and the Dallas Stars meet in the second half of a home-and-home Central division clash in NHL action from the American Airlines Center on Saturday afternoon.

The Dallas Stars will hope for a bit of revenge at home after Nashville extended the Stars’ losing streak to 4 games with a 2-0 Predators victory in Thursday’s matchup. Filip Forsberg opened the scoring for the Preds in the final minute of the opening period and the lead would hold for much of the 2nd before Matt Duchene doubled Nashville’s lead with just over six minutes to go in the 2nd period. Dallas outshot the Predators 10-8 in the 3rd period and 33-32 in the game, but the Stars would not be able to break the seal on Nashville’s goal as the Predators rode the 2-0 lead to the finish line.

Juuse Saros picked up the victory in goal for Nashville, stopping all 33 shots that he faced on the way to his 3rd shutout of the season while Anton Khudobin took the loss, falling to 16-8-4 on the year after allowing both goals on 32 shots faced in the losing effort for Dallas.

The plus money with Nashville is tempting as I’m not trying to lay juice with a Dallas team that’s lost 4 straight. However, a lot of Nashville’s recent success has come at home and while they’re struggling, you get the feeling that there’s going to be a game that Dallas just shows up for and I think it’s this one with all eyes on them being an afternoon game. I’ll lay the juice with Dallas in this spot.