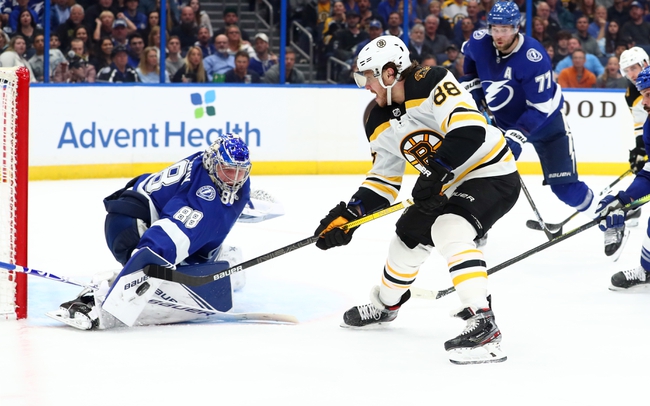 The Tampa Bay Lightning and the Boston Bruins meet in an Atlantic division clash in NHL action from the TD Garden on Saturday night.

The Tampa Bay Lightning come into this important game looking to build some momentum after a 4-0 win over the Montreal Canadiens in their last outing. Victor Hedman bookended the scoring for Tampa Bay with the first goal just :49 into the game and the last goal of the game with just over a minute to go in the 3rd period. Nikita Kucherov had a goal and an assist to bring his total to 82 points this season while Alex Killorn added a goal to the score sheet as well for the Bolts in the victory. Andrei Vasilevskiy got the win between the pipes to improve to 34-13-3 on the year after stopping all 32 shots faced for his 3rd shutout of the season.

The Boston Bruins will be looking to add to their current four-game winning streak after picking up a 2-1 overtime win on the road against Florida in their last outing, posting back-to-back 2-1 wins to sweep the Sunshine State road trip. Patrice Bergeron had a goal while Torey Krug had the overtime winner and an assist as well as Krug cranked 5 shots on target as did David Pastrnak who finished the game with an assist to bring his point total to 93 for the year, tied for the 3rd-best total in the NHL in that department. Jaroslav Halak got the win to improve his record to 18-6-6 in the blue paint this year, stopping 32 of 33 shots faced in the winning effort.

Getting Tampa Bay and plus money is such a rarity that you almost have to take it whenever it comes up. But I emphasize the word almost. Boston is playing really, really well in their own right and the Bruins have been pretty much lights out on home ice all season long. Getting the hotter team at a reasonable price like this where they’ve played really well all year long? Yeah, I’ll side with Boston here.