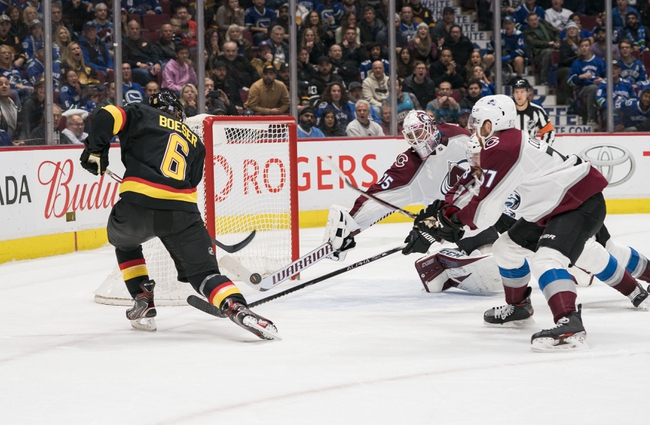 Where to Watch: SN-Pacific, Altitude Stream live sports and exclusive originals on ESPN+. Sign up now!

The Colorado Avalanche and the Vancouver Canucks meet in NHL action from the Rogers Arena on Friday night.

The Colorado Avalanche will look to rebound from a 4-3 overtime loss to Anaheim last time out. Vladislav Namestnikov opened the scoring for Colorado just 3:51 into the game but Anaheim would tie the game at one just 1:43 later. Anaheim would take the lead with just over six minutes to go in the 1st but Gabriel Landeskog would tie the game at two just :40 later. Anaheim took the lead with the lone goal of the 2nd period before Nathan MacKinnon scored to tie the game at three just over seven minutes into the 3rd. Neither side found a winner in regulation, so it was off to OT where both sides had their chances but Anaheim would strike just before the end of the extra period to take home the win and the extra points that goes with it. Pavel Francouz got the loss, falling to 19-5-4 on the year after allowing all 4 goals on 30 shots faced in the losing effort.

The Vancouver Canucks will be out to snap a four-game losing streak after a 4-2 loss to Arizona last time out. Arizona opened the scoring with the lone goal of the opening period, and that lead would hold through the rest of the 1st and all of the 2nd before Tyler Toffoli tied the game at one just 3:19 into the 3rd and Tanner Pearson gave Vancouver the lead 2:57 after that. Arizona would tie the game at two just after the midway point of the period and the ‘Yotes would take the lead 2:29 later before icing the win with an empty-netter in the dying seconds of the 3rd. Thatcher Demko took the loss, falling to 11-9-2 on the year after allowing 3 goals on 39 shots faced in the losing effort.

The plus money with Vancouver at home is definitely worth a look, but the problem I have is that we’re starting to see that Thatcher Demko may not be a consistent or reliable fix for Vancouver between the pipes for the foreseeable future, at least until Jacob Markstrom comes back for the Canucks. Colorado is rolling along right now and the price isn’t back for the Avalanche either, even on the road. I’ll lay the juice with Colorado in this one.