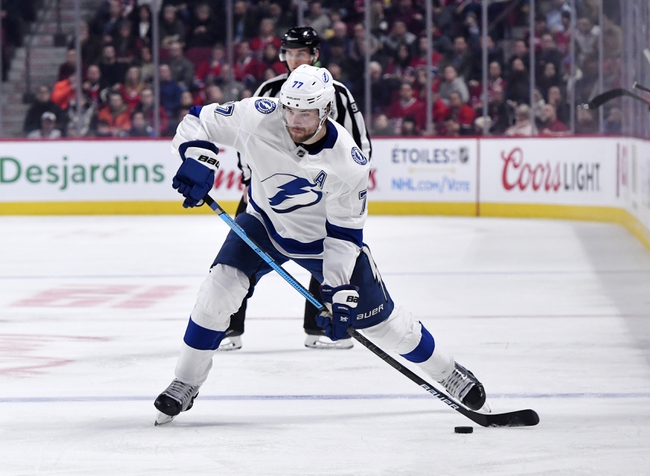 The Montreal Canadiens and the Tampa Bay Lightning meet in NHL action from the Amalie Arena on Thursday night.

The Montreal Canadiens will look to build on back-to-back wins after a 6-2 win over the New York Islanders last time out. Brendan Gallagher, Jeff Petry and Charles Hudon staked the HAbs a 3-0 1st period lead with 3 goals in a span of 5:03 and Paul Byron pushed the lead to 4-0 with the lone goal of the 2nd period. The Islanders would get on the board just over six minutes into the 3rd period but Jordan Weal would cancel the goal out with just over four and a half minutes to play. The Islanders would respond just :53 later but Joel Armia would ice the win with just under three minutes to go with an empty-netter. Carey Price got the win to improve to 27-23-6 on the year after stopping 20 of 22 shots faced in the winning effort.

The Tampa Bay Lightning will look to rebound from a 2-1 loss to the Boston Bruins in their last outing. Boston opened the scoring with less than a minute to go in the opening period and the Bruins would follow that up with a 2nd goal just after the midway point of the 2nd period. Mitchell Stephens would pull a goal back for Tampa Bay with 2:32 to go in the 2nd period, but that’s as close as the Bolts would get as Boston carried the lead through the 3rd period and to the finish line, sending Tampa Bay back empty-handed. Andrei Vasilevskiy got the loss, falling to 33-13-8 on the year after allowing both goals on 35 shots faced in the losing effort.

I get the Lightning being favored at home, but this game means a whole heck of a lot more to Montreal who need to keep winning games down the stretch if they want any sliver of hope for their playoff push down the stretch. Tampa Bay is also extremely banged up defensively, and I think the loss of Steven Stamkos will continue to hurt the Lightning here. I’ll take a shot with Montreal and the plus money here.