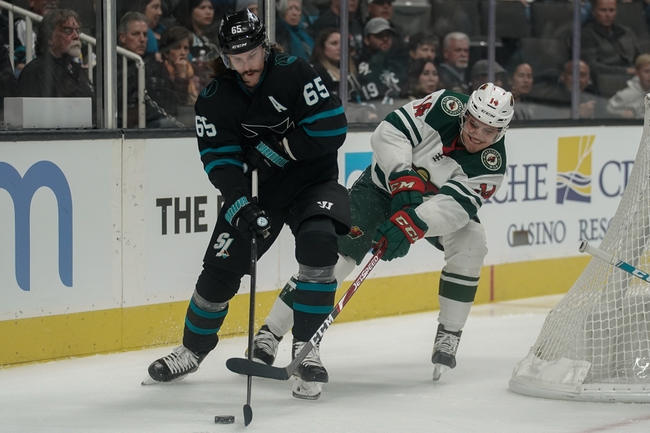 The Minnesota Wild and the San Jose Sharks meet in NHL action from the SAP Center on Thursday night.

The Minnesota Wild will try to build on a 3-1 win over the Nashville Predators in their last outing. Luke Kunin opened the scoring for Minnesota just over four minutes into the game before Kevin Fiala doubled the lead with just under eight minutes to go in the opening frame, Fiala’s 5th straight game with a goal. The 2-0 score would hold going into the 3rd where Zach Parise buried just 1:38 into the final period pushing the lead to 3-0, but Nashville would pull a goal back just 3:29 later. That’s as close as Nashville would get though, as the Wild would slam the door shut the rest of the way. Alex Stalock got the win to improve to 19-10-4 on the year after stopping 37 of 38 shots faced in the winning effort.

The San Jose Sharks will look to add to their current three-game winning streak after a 5-2 win over the Toronto Maple Leafs last time out.  Evander Kane opened the scoring with the lone goal of the opening period before Toronto tied the game at one 2:48 into the 2nd period. Antti Suomele restored San Jose’s lead just 1:06 later but Toronto would tie the game at two late in the 2nd period. Stefan Noesen gave the Sharks the lead just under six minutes into the 3rd and Kane would score his 2nd goal of the game just :50 later and the lead would hold until Radim Simek contributed an empty-netter in the last minute of the game to seal the win for Toronto. Martin Jones got the win to improve to 17-19-2 on the year after stopping 25 of 27 shots faced in the winning effort.

I kind of get Minnesota being favored as they’ve played slightly better over the last little while, but we’re getting a cheaper price with a San Jose team that’s won 3 straight against some pretty tough customers like Toronto and Pittsburgh, as well as a Sharks team that’s had the upper hand on the Wild, especially at home for some time now. I wouldn’t be surprised if the Sharks put up a clunker in this spot, but I think that San Jose gets up for this one, so I’ll side with the Sharks at home here.