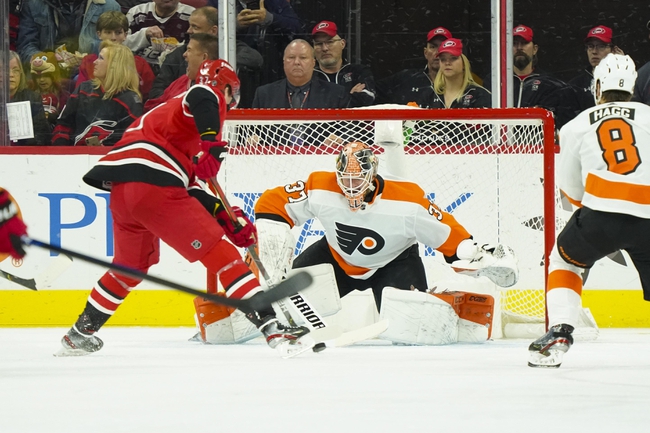 Where to Watch: NBCS, NBCS-Philadelphia Stream live sports and exclusive originals on ESPN+. Sign up now!

The Carolina Hurricanes and the Philadelphia Flyers meet in NHL action from the Wells Fargo Center on Thursday night.

The Carolina Hurricanes will look to snap a three-game losing strea after a 4-3 overtime loss to Montreal last time out. Montreal opened the scoring just 2:40 into the game before surging ahead 3-0 with a pair of goals :17 apart within the first 4:03 of the 2nd period. Haydn Fleury got the ‘Canes on the board just 3:42 later and Joel Edmundson cut the deficit to 3-2 just 1:14 into the 3rd period. Justin Williams would tie the game for Carolina with just over a minute to go in regulation, forcing an overtime period. The extra frame was short-lived though, as Montreal found the game-winner just :52 into overtime. Alex Nedeljkovic took the OT loss, falling to 0-1-1 after giving up a goal on 19 shots in relief of Anton Forsberg.

The Philadelphia Flyers will look to extend their current seven-game winning streak after a 5-2 win over Washington last time out. Washington opened the scoring with the lone goal of the opening period bfore Travis Konecny tied the game at one just after the seven-minute mark of the 2nd period. Kevin Hayes and Tyler Pitlick would scored 2:17 apart to push the Flyers’ lead to 3-1 before the Capitals responded just 1:27 later. Ivan Provorov would restore the two-goal cushion just under seven minutes into the 3rd before Scott Laughton pushed the lead to 5-2 with just under six minutes to go, a lead that the Flyers wouldn’t let go of the rest of the way. Brian Elliott got the win to improve to 16-7-4 on the year after stopping 25 of 27 shots faced in the winning effort.

Carolina is 5-2 in the last 7 meetings between these two teams.

I considered Carolina and the plus money with the Flyers on the back-to-back, but the problem is that the Hurricanes still have some major goaltending issues and Forsberg or Nedeljkovic probably aren’t the solution for that problem and it’s a shame because it’s the pickle that the ‘Canes are in. Bottom line is we’re getting a pretty cheap price with a Flyers team that’s on a roll right now, and I can’t pass that up. Give me Philly here.