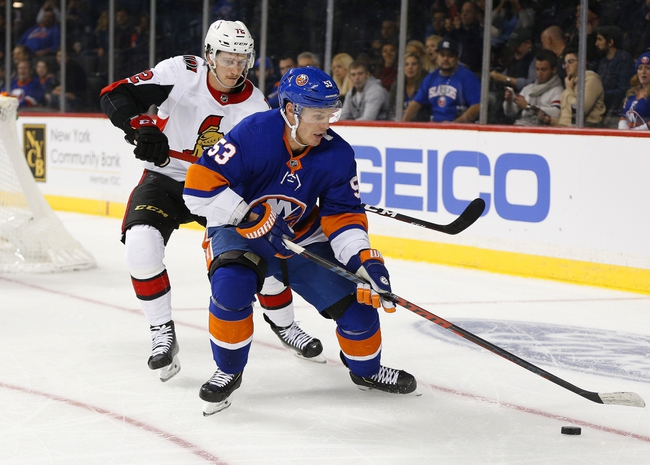 The New York Islanders and the Ottawa Senators meet in NHL action from the Canadian Tire Center on Thursday night.

The New York Islanders will look to snap a four-game losing streak after a 6-2 loss to the Montreal Canadiens last time out. Montreal jumped out to a 3-0 lead later in the opening period with all 3 goals coming in a span of 5:11 before the Habs made it 4-0 with the lone goal of the 2nd period. Brock Nelson got the Isles on the board just over six minutes into the 3rd but Montreal would respond with just four and a half minutes to go. The Isles would pull a goal back just :53 later, but again the Habs had an answer just :49 after that. Thomas Greiss took the loss, falling to 16-9-3 on the year after giving up 3 goals on 12 shots before being pulled in the 1st period.

The Ottawa Senators will try to bounce back after a 7-3 loss to the Pittsburgh Penguins last time out. Pittsburgh jumped out to a 2-0 lead with a pair of goals :51 apart within the first two minutes of the game before Jayce Hawryluk got the Senators on the board with 3:36 to go in the opening period. The Pens would respond before the end of the 1st and would push ahead 4-1 with the lone goal of the 2nd period. The Pens went up 5-1 in the 1st minute of the 3rd, but Brady Tkachuk would respond just :33 later and Connor Brown cut the deficit to 5-3 just past the midway point of the final frame. 5-3 was as close as Ottawa would get though, as Pittsburgh would strike twice more down the stretch to give us the 7-3 final score line. Craig Anderson took the oss, falling to 9-16-2 on the year after allowing all 7 goals on 35 shots faced in the losing effort.

I’m not keen on laying juice on the road, especially with a team like the Islanders that’s lost 4 straight. However, I’m just not getting enough plus money to take a shot on Ottawa, as I thought last game where maybe the Sens provided some value against Pittsburgh who had lost six straight coming into that game and what happened? The Senators got their teeth kicked in. The Islanders need this win a whole lot more than Ottawa does, so I’ll lay the juice with the Islanders on the road here.