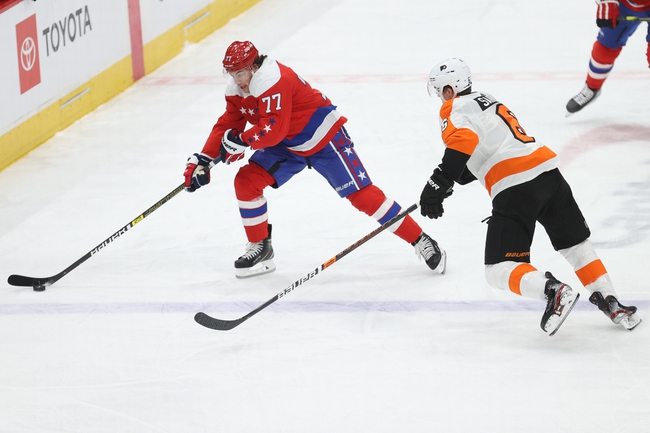 The Philadelphia Flyers and the Washington Capitals meet in NHL action from the Capital One Arena on Wednesday night.

The Philadelphia Flyers will look to add to their current six-game winning streak after a 5-3 win over the New York Rangers last time out. Matt Niskanen opened the scoring less than two minutes into the game before Sean Couturier doubled the lead with just under nine minutes to go in the opening frame and Michael Raffl pushed the lead to 3-0 late in the 1st. Derek Grant pushed the lead to 4-0 just over a minute into the 2nd before New York finally got on the board just after the midway point of the 2nd. Travis Konecny restored the four-goal cushion just three minutes later and despite their best efforts, pulling a pair of goals back in the 3rd, the Rangers wouldn’t get any closer as Philadelphia held on for the 5-3 win. Carter Hart got the win to improve to 22-12-3 on the year after stopping 23 of 26 shots faced in the winning effort.

The Washington Capitals will look to build on a 4-3 win over Minnesota last time out. Minnesota opened the scoring just over three minutes into the game before Alex Ovechkin tied the game at one just 4:20 later. Richard Panik and Ovechkin (with his 2nd of the game) scored :31 apart to push Washington’s lead to 3-1. Minny would cut the deficit to 3-2 just over two minutes later, and the lead would hold going into the 3rd where Tom Wilson restored Washington’s two-goal cushion less than a minute into the final period. The Wild pulled a goal back with just over seven minutes to go, but that’s as close as they’d get as Washington held on for the win. Braden Holtby got the win to improve to 24-13-5 on the year after stopping 37 of 40 shots faced in the winning effort.

The Caps being favored at home makes sense, but we’re getting decent sized plus money with a Flyers team that’s red-hot after winning six straight and has gone 2-0-1 against the Capitals this season, including a 7-2 win in their last trip to Washington less than a month ago. A Washington win wouldn’t surprise me, but there’s too much value to pass on with the Flyers here.