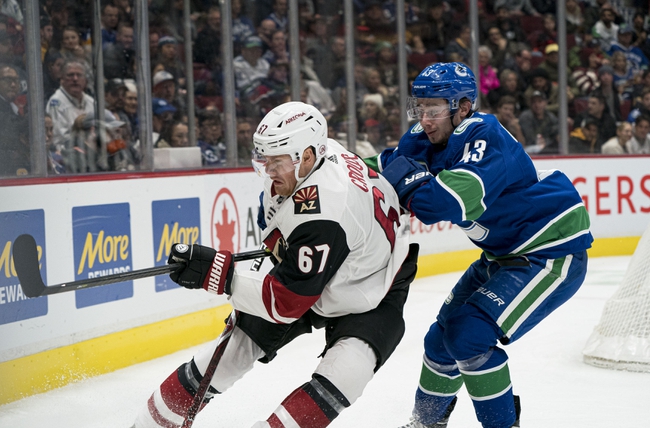 The Arizona Coyotes and the Vancouver Canucks meet in a Pacific division matchup in NHL action from Rogers Arena on Wednesday night.

The Arizona Coyotes will be looking to build on a big 5-2 win over Buffalo last time out. Buffalo opened the scoring just under eight minutes into the game and doubled their lead just :44 later. The lead would hold going into the 2nd where Jordan Oesterle and Phil Kessel scored :53 apart to tie the game at two and Clayton Keller scored just 4:17 later to push Arizona in front. Keller would strike again to make it 4-2 with just over six minutes to go and Oliver Ekman-Larsson made it 5-2 with an empty-netter in the dying seconds of the 3rd period to ice the win for Arizona. Antti Raanta got the win to improve to 15-14-3 on the year after stopping 25 of 27 shots faced in the winning effort.

The Vancouver Canucks will look to snap a three-game losing streak after a 5-3 loss to Columbus last time out. Bo Horvat opened the scoring just a minute into the game and Elias Pettersson doubled the lead just after the seven minute mark of the opening frame. The Blue Jackets would pull one back just after the midway point of the opening period, but J.T. Miller would respond and restore the two-goal cushion just 1:12 into the 2ndperiod, the lone goal of the middle frame. Vancouver would carry that lead into the 3rd, but Columbus would pull one back with just over seven minutes to go and would tie the game at three with less than five minutes to play Columbus completed the comeback with the game-winner and the insurance marker 1:26 apart in the last couple of minutes to secure the win for Columbus and send Vancouver back empty-handed. Louis Domingue took the loss, falling to 3-9-2 on the year after stopping 30 of 34 shots faced in the losing effort.

The plus money with the Coyotes is tempting given the recent bumpy patch that the Canucks have hit, but the thing is that Vancouver’s recent slide came on the road and the Canucks have by far done their best work on home ice this season. The Coyotes need to keep winning to try to keep up in the playoff hunt, but I just think this is a bad spot for Arizona considering their struggles on the road combined with Vancouver’s play on home ice. I’ll lay the juice with Vancouver at home in this one.