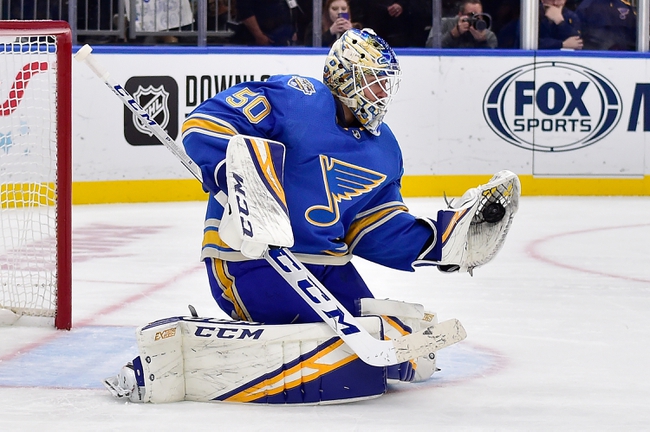 Where to Watch: FS-Midwest, MSG+ Stream live sports and exclusive originals on ESPN+. Sign up now!

The St. Louis Blues and the New York Rangers meet in NHL action from Madison Square Garden on Tuesday night.

The St. Louis Blues will look to add to their current seven-game winning streak after a 4-3 shootout win over the Dallas Stars last time out. Dallas opened the scoring 8:30 into the game before David Perron tied the game for St. Louis with just under seven minutes to go in the period. Tyler Bozak gave St. Louis a 2-1 lead just over four minutes into the 2nd period before Brayden Schenn pushed the lead to 3-1 with just under seven minutes to go in the 2nd. Dallas pulled a goal back just two minutes after that and the Blues almost held on for the win but Fallas would tie the game at three with :19 to go. The game needed OT, which solved nothing, so it was off to the shootout where Ryan O’Reilly was the lone shooter to score in the shootout, giving the Blues the win and the extra point that goes along with it. Jake Allen got the win to improve to 10-6-3 on the year after stopping 28 of 31 shots faced in the winning effort.

The New York Rangers will look to rebound from back-to-back losses to the Philadelphia Flyers after a 5-3 loss last time out. Philly opened the scoring less than two minutes into the game before doubling the lead just past the midway point of the 1st and making it 3-0 late in the 1st. The Flyers pushed the lead to 4-0 just over a minute into the 2nd before Mike Zibanejad got the Rangers on the board with just over seven minutes to go in the 2nd. Philly restored the four-goal cushion just three minutes later, but Pavel Buchnevich cut into the lead early in the 3rd and Zibanejad added his 2nd goal of the game to make it 5-3 later in the 3rd, but that’s as close as the Rangers would get as New York was sent back with another loss. Henrik Lundqvist took the loss, falling to 10-12-3 on the year after allowing 5 goals on 26 shots faced in the losing effort.

Both of these teams have been kind to us lately, and it’s hard going against St. Louis who is on another roll right now, but it’s also difficult turning down plus money with the Rangers at home. With that said, I’m going to side with the under. Both teams have been racking up wins left and right, and with this game being in such a high-profile venue like MSG between a pair of solid teams like St. Louis and the Rangers, I think we see a tight, playoff-style game that hits 5 goals at most, maybe a 3-2 or 2-1 game. Give me the under in this spot.