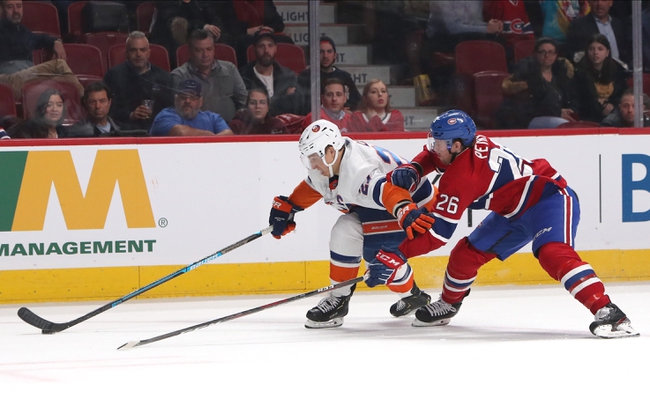 The Montreal Canadiens and the New York Islanders meet in NHL action from the Barclays Center on Tuesday night.

The Montreal Canadiens will look to build on a 4-3 overtime win over Carolina last time out. Phillip Danault opened the scoring just 2:40 into the game, and Montreal’s lead would hold going into the 2nd where Max Domi and Brendan Gallagher scored :17 apart to take a 3-0 lead. Carolina opened their scoring just 3:42 later, and the Hurricanes would pull another goal back just over a minute into the 3rd. Carolina would complete the comeback, tying the game at three with just over a minute to go in the 3rd, eventually forcing OT, but Jeff Petry would pot the game winner for Montreal just :52 into the extra period. Charlie Lindgren got the win to improve to 2-3-0 on the year after stopping 27 of 30 shots faced in the winning effort.

The New York Islanders will be out to snap a three-game losing streak after a 4-0 loss to the Boston Bruins in their last outing. Boston opened the scoring just 4:30 into the game before doubling the advantage with just under seven minutes to go in the opening period. The two-goal cushion would hold going into the 3rd where the Bruins forged 3-0 ahead just after the midway point of the 3rd and added a 4th for good measure with just three and a half minutes to go. Ryan Pulock led the Isles with 4 shots on goal while Brock Nelson and Jordan Eberle each had 3 shots on goal in the losing effort. Semyon Varlamov took the loss, falling to 19-13-5 on the year after allowing all 4 goals on 30 shots faced in the loss.

I get why the Islanders and a reasonable line at home would be worth a look, but I want no part of the Islanders in their current form as New York has had trouble stringing wins together lately. Montreal hasn’t been a prize themselves, but the Canadiens know the situation they’re in and need to start rattling off wins in a hurry if they’re going to keep their slim playoff hopes alive. Add in the fact that the Habs have had the Islanders’ number in recent years, and I think the plus money with Montreal is worth a shot here.