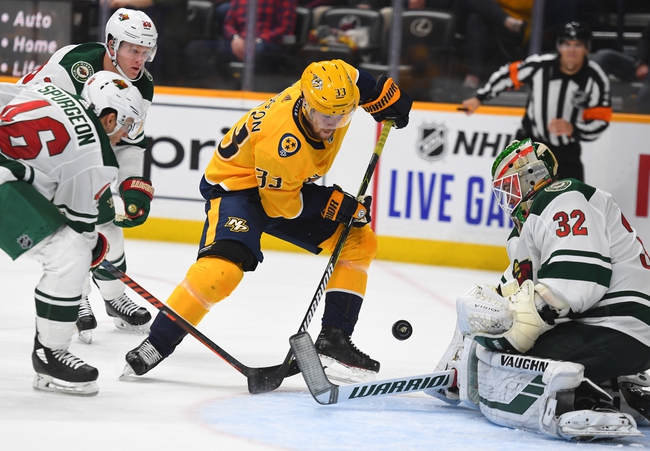 The Nashville Predators and the Minnesota Wild meet in NHL action from the Xcel Energy Center on Tuesday night.

The Nashville Predators come into this one fresh off of an 8-3 loss to Edmonton last time out. Edmonton opened the scoring just over six minutes into the game before doubling the lead in the last minute of the period. Roman Josi and Calle Jarnkrok tied the game at two for Nashville within the first 2:28 of the 2nd period with goals :14 apart. Edmonton restored the lead with just over six minutes to go in the 2nd period before Nick Bonino tied the game at three just 1:31 later. Edmonton would blow things open in the 3rd with 5 unanswered goals all in a span of 5:13 to take an insurmountable 8-3 lead that the Oilers would ride to the finish line. Pekka Rinne took the loss, falling to 18-14-4 on the year after allowing all 8 goals on 31 shots faced in the losing effort.

The Minnesota Wild will look t rebound from a 4-3 loss to Washington last time out. Ryan Donato opened the scoring just over three minutes into the opening period. Washington would tie the game just 4:20 later and take a 3-1 lead with a pair of goals :31 apart. Kevin Fiala cut the deficit to 3-2 just 2:14 later and the lead would hold up until the 3rd period. Washington restored the two-goal cushion just :40 into the 3rd, but Zach Parise would cut the lead back to 4-3 and despite the Wild outshooting Washington 17-10 in the 3rd, the Wild wouldn’t get any closer as Washington rode the 4-3 scoreline to the finish. Alex Stalock took the loss, falling to 18-10-4 on the year after giving up 4 goals on 30 shots faced in the losing effort.

The Predators have owned the Wild, winning seven straight meetings, but the problem I have is that the Preds are on a back-to-back, had to travel from Nashville to Minnesota and just got throttled by the Oilers last game. Minnesota is rested and home where they tend to play their best hockey. I just think this is a bad spot for Nashville, so I’ll lay the reasonable price with the Wild at home here.