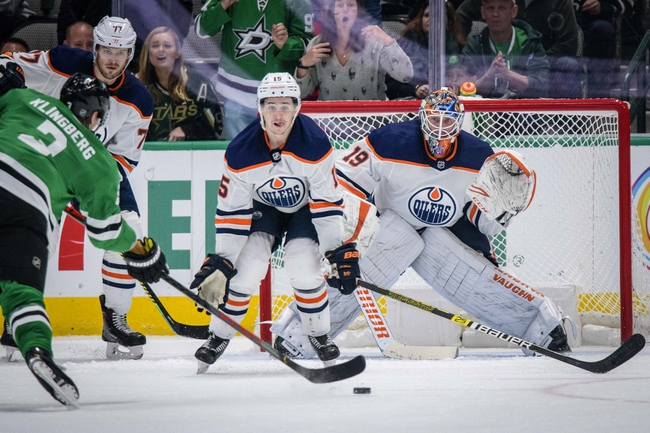 Where to Watch: SN-West, FS-Southwest Stream live sports and exclusive originals on ESPN+. Sign up now!

The Edmonton Oilers and the Dallas Stars meet in NHL action from the American Airlines Center on Tuesday night.

The Edmonton Oilers will look to build on back-to-back wins after an 8-3 beatdown of Nashville last time out. Josh Archibald opened the scoring for Edmonton just 6:23 into the period before Leon Draisaitl doubled Edmonton’s lead late in the 1st period. The Preds would tie the game at two early in the 2nd with a pair of goals :14 apart but Kailer Yamamoto would re-take the lead for Edmonton later in the 2nd, but Nashville would tie the game at three just before the end of the 2nd period. Connor McDavid and the aforementioned Draisaitl would score :35 apart early on in the 3rd to push the Oilers up 5-3, before Zack Kassian made it 6-3 just 1:46 later and Draisaitl pushed the lead to 8-3 with a pair of goals 1:27 apart for a four-goal, five-point night for the Oilers in the win. Mike Smith got the win, improving to 19-10-5 on the year after stopping 27 of 30 shots faced in the winning effort.

The Dallas Stars will look to rebound from back-to-back losses after a 4-3 shootout loss to the Blues in their last outing. Tyler Seguin opened the scoring for Dallas just 8:30 into the game but St. Louis would tie the game with just over seven minutes to go in the opening period. The Blues would take a 2-1 lead just over four minutes into the 2nd period and push the lead to 3-1 with just under seven minutes to go in the middle frame before Denis Gurianov pulled a goal back for the Stars just two minutes later. Dallas would battle and finally break through, with John Klingberg’s goal tying the game at three with just :19 to go, forcing extra hockey, overtime solved nothing, so it was off to the shootout where St. Louis found the only goal of the six shooters, getting the win and the extra point that goes with it, sending Dallas back with the loss and just one point. Anton Khudobin took the loss, falling to 16-7-3 on the year after giving up 3 goals on 29 shots faced in the losing effort.

The Oilers and the plus money is tempting, but Edmonton’s on a back-to-back where they’ve historically struggled and the offense usually takes a dip after an outburst like we saw on Monday, as Edmonton has lost 8 of their last 9 games following a game where they scored 5 or more goals. Dallas is due to bounce back, and the Stars have pretty much owned the Oilers for years now. I’ll side with Dallas to get the job done in regulation to bring the price down a bit.