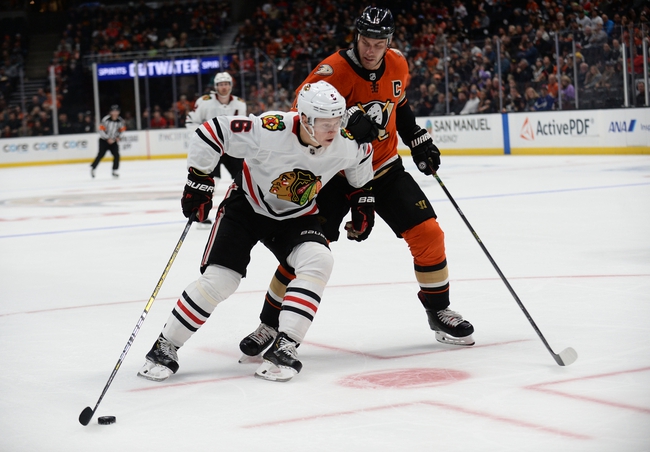 Where to Watch: FS-West, NBCS-Chicago Stream live sports and exclusive originals on ESPN+. Sign up now!

The Anaheim Ducks and the Chicago Blackhawks meet in NHL action from the United Center on Tuesday night.

The Anaheim Ducks will look to rebound after suffering a 3-0 loss to the New Jersey Devils last time out. New Jersey took the lead with just under three minutes to go in the 1st before doubling the lead just under four minutes into the 2nd period. Anaheim outshot the Devils 13-5 in the 3rd period, but it was New Jersey that potted a 3rd goal while the Ducks failed to break the seal on New Jersey’s goal in the losing effort. Kiefer Sherwood and Ryan Getzlaf each had a team-high 4 shots on goal in the loss as well. John Gibson took the loss, falling to 19-25-5 on the year after allowing all 3 goals on 34 shots faced in the losing effort.

The Chicago Blackhawks will look to build on back-to-back wins after a 3-2 shootout win over Florida last time out. Florida opened the scoring just over four minutes into the game before Chicago tied the game at one with just over seven minutes to go in the opening period. Drake Cagguila gave Chicago a 2-1 lead 6:21 into the 2ndperiod and the Hawks would ride that lead until late in the 3rd before Florida tied the game at two late in the 3rd. The game needed OT, which solved nothing, so it was off to the shootout where Jonathan Toews and Patrick Kane each scored in the shootout while Florida missed both of their attempts to give Chicago the win and the extra point that comes along with it. Corey Crawford got the win to improve to 13-18-3 on the year after stopping 38 of 40 shots faced as well as both shots faced in the shootout.

I’m not really trying to lay this kind of juice with Chicago as this is a Blackhawks team that’s on the outside looking in in the playoff picture. However, the Blackhawks are still the better option as they’re in closer proximity to the playoffs than Anaheim is as the Ducks have been done for a while, and their play on the road hasn’t helped. I think Chicago is just in a better position here, so I’ll take the Blackhawks to win in regulation to get the price down a bit.