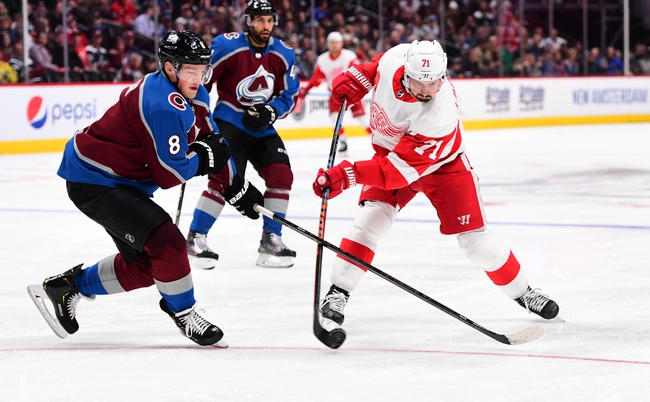 The Colorado Avalanche and the Detroit Red Wings meet in NHL action from the Little Caesars arena on Monday night.

The Colorado Avalanche will look to add to their current six-game winning streak after a 3-2 win over Nashville last time out. The game was scoreless through the opening 20 minutes before Gabriel Landeskog broke the tie with just under seven minutes to go in the 2nd period. Martin Kaut doubled the lead just 2:15 later, but Nashville would cut into the deficit, making it a 2-1 game with just over five minutes to go in the game. Erik Johnson made it 3-1 with an empty-netter with less than a minute to play. Nashville would add a consolation goal with just a couple of seconds to go, but that’s where the luck would end as Colorado held on for the win. Pavel Francouz got the win to improve to 19-5-3 on the year after stopping 30 of 32 shots faced in the winning effort.

The Detroit Red Wings will be out to snap a five-game losing streak after a 4-3 shootout loss to Ottawa Franz Nielsen opened the scoring less than four minutes into the game and Dylan Larkin doubled Detroit’s lead just under seven minutes into the 2nd period. Ottawa pulled a goal back with just over six minutes to play in the 2ndand the Sens would tie the game less than two minutes into the 3rd. Ottawa would take the lead just over four minutes later, but Detroit would tie the game at three just 1:37 later. The rest of the 3rd didn’t produce a winner, and neither did overtime, so it was off to the shootout where Detroit missed all three of their attempts while Ottawa found the net in round two. Jonathan Bernier took the loss, falling to 13-20-3 after giving up 3 goals on 39 shots faced in the losing effort.

Part of me wants to take a shot with Detroit and the plus money, but then I remember it’s Detroit and I want no part of the Red Wings. I mean Detroit is now 11-47-5 against teams that aren’t Montreal, and I keep beating that note into the ground as it just baffles me how a professional team can be this bad. Colorado’s rolling right now and are looking like a team that’s primed and ready for the late season playoff push and I think they keep that momentum going with a big win here so I’ll side with the Avs on the puck line.

Get Premium Picks Start Winning Now »
The pick in this article is the opinion of the writer, not a PickDawgz site consensus.
Previous Pick
NHL Power Rankings - All 31 Teams: 3/2/20
Next Pick
Nashville Predators vs. Edmonton Oilers - 3/2/20 NHL Pick, Odds, and Prediction