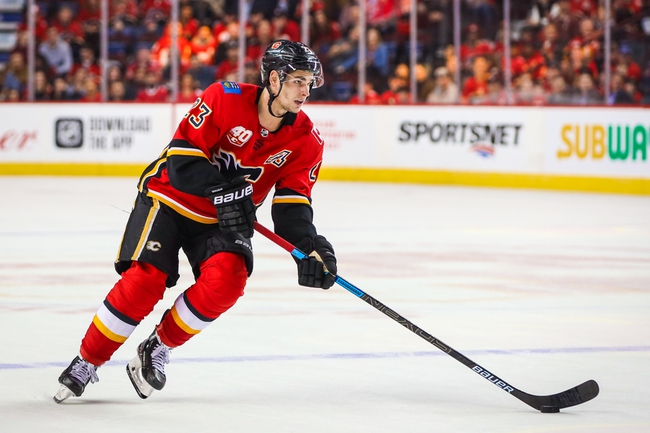 Where to Watch: FS-Florida Stream live sports and exclusive originals on ESPN+. Sign up now!

The Calgary Flames and the Florida Panthers meet in NHL action from the BB&T Center on Sunday afternoon.

The Calgary Flames come into this game looking to bounce back after a 4-3 loss to the Tampa Bay Lightning in their last outing. Tampa Bay opened the scoring with the lone goal of the opening period before forging ahead 3-0 just after the midway point of the 2nd period. Andrew Mangiapane and Elias Lindholm scored :52 apart to cut the deficit to 3-2, but the Bolts would respond just :53 after that to restore the two-goal lead. The lead would hold for much of the 3rd before Sean Monahan made things interesting at 4-3 with just under three minutes to go. The problem is that’s as close as the Flames got as T-Bay held on for the win. David Rittich took the loss, falling to 24-16-6 on the year after allowing 4 goals on 33 shots faced in the losing effort.

The Florida Panthers will look to come back from back-to-back losses after a 3-2 shootout loss to Chicago last time out. Mike Hoffman opened the scoring for Florida just over four minutes into the game before Chicago would tie the game at one with just over seven minutes to go in the 1st. The Blackhawks took the lead with the lone goal of the 2nd period and the lead would hold until late in the 3rd where Mike Matheson tied the game at two with just 1:28 to play. The rest of the 3rd didn’t produce a winner, and neither did OT, so it was off to the shootout where Chicago scored on both of their attempts while Florida missed both of theirs, handing Chicago the win. Sergei Bobrovsky got the loss, falling to 23-19-6 on the year after allowing two goals on 29 shots faced in regulation and OT.

Head-to-head, Calgary is 6-2 in the last 8 meetings between these two teams.

I want to say I get Florida being favored because they’re at home, but that’s 6 losses in a row for the Panthers at home after falling to Chicago on Saturday. Calgary may have expended a lot of energy against the Lightning, but the Flames are still rock solid on the road and have been well above .500 since the middle of November away from home. I’ll take my shot with the Flames at even money here.