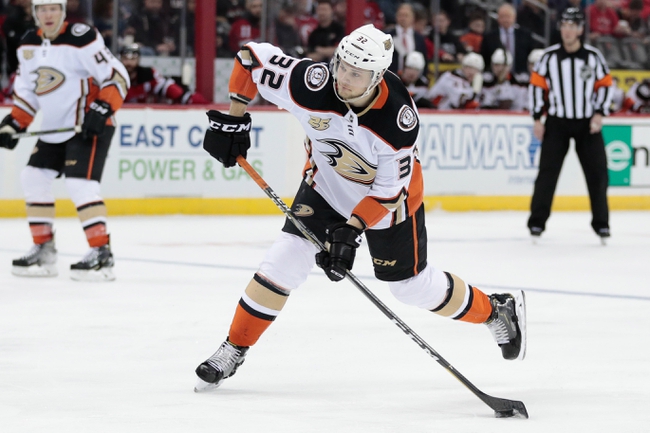 The New Jersey Devils and the Anaheim Ducks meet in NHL action from the Honda Center on Sunday night.

The New Jersey Devils will look to rebound from back-to-back losses after a 2-1 loss to Los Angeles last time out. Jesper Bratt opened the scoring for the Devils just over seven minutes into the game but the Kings would tie the game at one with just under seven minutes to go in the 2nd period. The 3rd period solved nothing, so it was off to the shootout where Los Angeles potted the game-winner just before the two-minute mark of the extra period. MacKenzie Blackwood took the loss, falling to 21-12-8 on the year after allowing both goals on 38 shots faced in the losing effort.

The Anaheim Ducks will look to build on back-to-back wins after a 3-2 win over Pittsburgh last time out. Danton Heinen opened the scoring with just under six minutes to go in the opening period before Pittsburgh tied the game at one just over a minute into the 2nd period .Ryan Getzlaf restored the two-goal lead for Anaheim just before the midway point of the 2nd. Brendan Guhle pushed the lead to 3-1 later in the 3rd, the lead that the Ducks would ride through most of the 3rd before Pittsburgh made things interesting at 3-2 with just over a minute to go, but that’s as close as Pittsburgh would get as the Ducks would hang on for the win despite being outshot 11-4 in the 3rd period. John Gibson got the win to improve to 19-24-5 on the year after stopping 28 of 30 shots faced in the winning effort.

Just when I think the Devils are turning things around and maybe they can keep it going and look respectable, the Ducks put up clunkers against the Sharks and the Kings. Anaheim’s been in the bad books for a while now, but the Ducks have also been playing the better hockey. I wouldn’t bet this game, but if forced to pick, I’d lay the juice with Anaheim at home in this one.