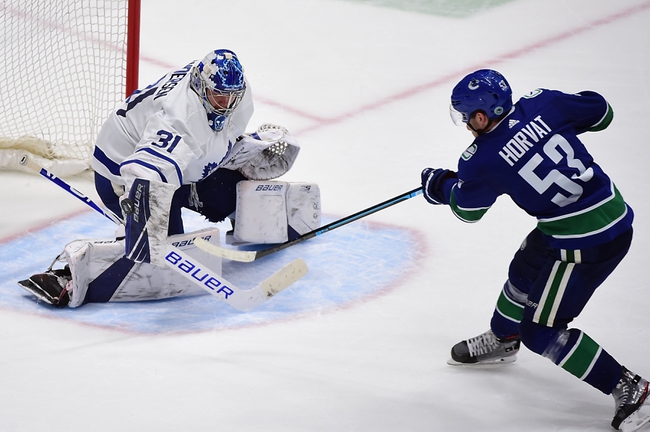 The Vancouver Canucks and the Toronto Maple Leafs meet in NHL action from the Scotiabank Arena on Saturday night.

The Vancouver Canucks will look to rebound from a 5-2 loss to the Ottawa Senators last time out. Ottawa jumped out to a 2-0 lead with a pair of goals :31 apart, and the Sens would ride that lead through most of the 2nd before J.T. Miller got Vancouver on the board with just seconds to go in the 2nd period. Ottawa restored the two-goal lead in the opening moments of the 3rd period but Tyler Toffoli would respond just over eight minutes later. The Canucks outshot Ottawa in the 3rd by a final count of 9-8, but they wouldn’t get any closer as Ottawa added two more goals :19 apart late in the 3rd to lift themselves to the 5-2 final. Thatcher Demko took the loss, falling to 11-7-2 on the year after allowing 4 goals on 24 shots faced in the losing effort.

The Toronto Maple Leafs will look to build on back-to-back wins after a 5-3 win over Florida last time out. Florida opened the scoring just over two minutes into the game before Zach Hyman tied the game at one just 1:09 later. The Panthers surged ahead 3-1 later in the period but Kasperi Kapanen would cut it to 3-2 and Auston Matthews would tie the game at three with goals 1:15 apart, giving us a 3-3 game after 20 minutes of play. The tie would hold through the 2nd and a good part of the 3rd before William Nylander pushed Toronto in front 4-3 at the nine-minute mark of the 3rd period. Florida outshot Toronto 14-6 in the 3rd but it didn’t matter as Justin Holl iced the win with an empty-netter with just :21 to go. Frederik Andersen got the win to improve to 27-13-6 on the year after stopping 24 of 27 shots faced in the winning effort.

I’d be lying if I said I wasn’t worried about a potential letdown for Toronto here, as the Leafs are coming off of that huge two-game Florida road trip with a win over a good Tampa Bay team as well as a win over the Florida Panthers that was massive in respect to the division race. However, I’m just not sold on Thatcher Demko as an NHL starter even though he’s been playing better lately, and I’m not sure that the Leafs are a team you want to throw your backup in against. If this was  Markstrom in goal I’d consider the plus money, but the Leafs have too much at stake to let a prime opportunity for a quality win pass them by. I’ll side with Toronto to get the job done in regulation to lower the price a bit.