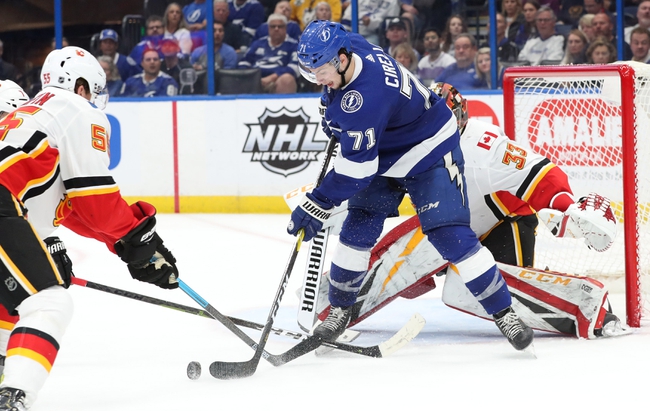 Where to Watch: SN-West, SunSports Stream live sports and exclusive originals on ESPN+. Sign up now!

The Calgary Flames and the Tampa Bay Lightning meet in NHL action from the Amalie Arena on Saturday afternoon.

The Calgary Flames come into this game looking to rebound from a 4-3 overtime loss to Nashville last time out. Nashville opened the scoring with the lone goal of the opening period coming in the final minute before Rasmus Andersson tied the game at one just :26 into the 2nd and Mikael Backlund gave Calgary the lead just before the four-minute mark of the period. The lead held until later in the 3rd when Nashville tied the game with just over five minutes to play but Calgary re-took the lead with just :43 to go. The Flames looked home free and headed for a win before Nashville tied the game at three with just a single second left on the clock. Nashville completed the comeback in OT with the game-winner just 1:20 into the extra period. David Rittich took the OT loss, falling to 24-15-6 on the year after allowing 4 goals on 38 shots faced in the losing effort.

The Tampa Bay Lightning will be out to snap a four-game losing streak after a 5-2 loss to Chicago last time out. The game was scoreless through the opening 20 minutes and most of the 2nd period before Brayden Point gave the Bolts the lead with just over four minutes to go in the 2nd period. Nikita Kucherov pushed the lead to 2-0 just :17 into the 3rd but Chicago would rally, tying the game with a pair of goals :26 apart around the five minute mark of the period before surging ahead 4-2 with another pair of goals 1:47 apart around the midway point of the 3rd before icing the win with an empty-netter with just two and a half minutes to go. Curtis McElhinney took the loss, falling to 8-7-2 on the year after allowing 4 goals on 26 shots faced in the losing effort.

Head-to-head, the road team is 5-1 in the last 6 meetings between these two teams.

Betting against Tampa Bay is always a risky proposition as the Lightning are capable of beating up on any opponent on any given night. However, the prices were nuts on the Lightning to being with, now we’re being asked to lay almost -200 with a Lightning team that’s lost 4 straight against a Calgary team that’s 15-4-3 on the road since the middle of November. No thanks. I’ll take a shot with Calgary just based on road form and the value in betting against Tampa Bay right now.