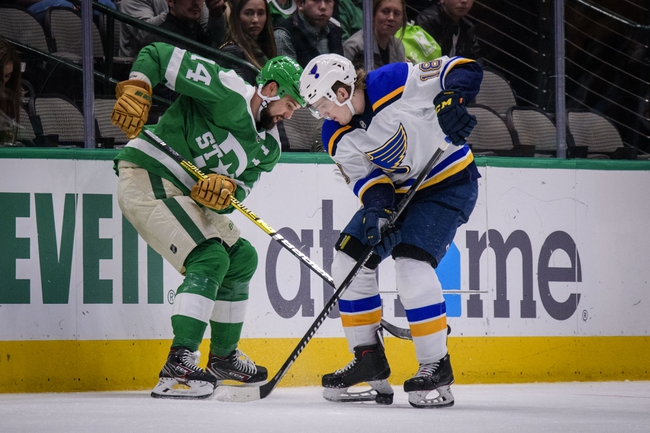 Where to Watch: FS-Southwest, FS-Midwest Stream live sports and exclusive originals on ESPN+. Sign up now!

The Dallas Stars and the St. Louis Blues meet in a Central division matchup in NHL action from the Enterprise Center on Saturday night.

The Dallas Stars will look to rebound from a narrow 4-3 loss to Boston in their last outing. Jamie Benn opened the scoring for Dallas with just over two minutes to go in the opening period. Boston tied the game at one in the dying seconds of the 1st before taking a 3-1 lead late in the 2nd period with a pair of goals 1:17 apart. Denis Gurianov pulled a goal back for Dallas just over a minute into the 3rd, but Boston would answer less than three minutes later. Miro Heiskanen made it interesting again with just over two minutes to go, but 4-3 was as close as Dallas would get as Boston held on for the victory. Ben Bishop took the loss, falling to 21-14-4 on the year after allowing all 4 goals on 28 shots faced in the losing effort.

The St. Louis Blues will look to add to their current six-game winning streak after a 3-2 overtime win over the Islanders last time out. New York surged ahead to an early 2-0 lead with just over three minutes to go in the 1st, but Brayden Schenn would pull a goal back in the final minute of the opening period, and that score would hold up going into the 3rd where Vince Dunn tied the game at two for the Blues with less than two minutes to go in regulation. The game eventually needed OT where Colton Parayko got the win for the Blues with just under two minutes to go in the extra frame. Jordan Binnington got the win to improve to 29-11-7 on the year after stopping 15 of 17 shots faced in the winning effort.

I considered the Stars at plus money given how well Dallas has been playing as of late. However, the Blues are just back to rolling along once again, winning 6 straight coming into this game, and Dallas just hasn’t had any luck against St. Louis recently in losing 5 of the last 6 meetings. I just think that a reasonable line and a red-hot Blues team is too good to pass on, so I’ll lay the reasonable price with St. Louis here.