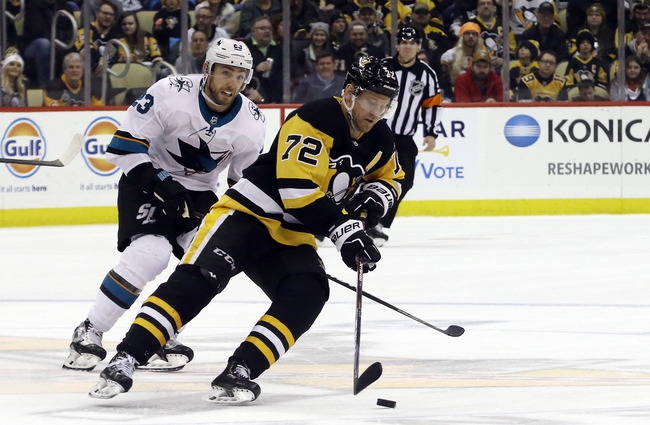 Where to Watch: ATT-Pitt, NBCS-California Stream live sports and exclusive originals on ESPN+. Sign up now!

The Pittsburgh Penguins and the San Jose Sharks meet in NHL action from the SAP Center on Saturday night.

The Pittsburgh Penguins will look to snap a five-game losing streak after a 3-2 loss to the Anaheim Ducks last time out. Anaheim took the lead with the lone goal of the opening period before Jason Zucker tied the game at one just over a minute into the 2nd period. The Ducks re-took the lead just before the midway point of the 2ndperiod and added a 3rd goal with less than three minutes to go in the middle period. Zucker made things interesting, cutting the deficit to 3-2 with his 2nd goal of the game, but despite the Pens outshooting Anaheim 11-4 in the 3rd period, Pittsburgh wouldn’t find an equalizer as Anaheim held on for the win. Matt Murray took the loss, falling to 17-10-6 on the year after allowing 3 goals on 21 shots faced in the losing effort.

The San Jose Sharks will look to build on a 3-2 overtime win over New Jersey last time out. The Devils leaped out to a 2-0 1st period lead with a pair of goals 3:59 apart before Mario Ferraro pulled a goal back just over two minutes into the 2nd and Marcus Sorensen would tie the game at two with just over four minutes to go in the middle period. The 3rd period solved nothing, so it was off to OT where Logan Couture completed San Jose’s comeback just :38 into overtime. Martin Jones got the win to improve to 15-19-2 on the year after stopping 21 of 23 shots faced in the winning effort.

Realistically I’m not touching this game as Pittsburgh seems like the kind of team that can break their streak in this game but I’m also not laying that much juice with a team that’s lost 5 in a row. San Jose hasn’t been great in their own right, but the Sharks have had success in this matchup and maybe the win over New Jersey has some carryover. I’ll take a shot with San Jose as a home dog in this one.