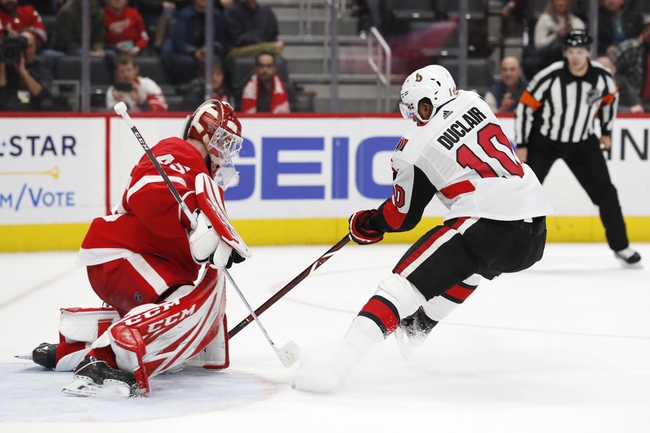 The Detroit Red Wings and the Ottawa Senators meet in NHL action from the Canadian Tire Centre on Saturday night.

The Detroit Red Wings will be out to snap a four-game losing streak after a 7-1 demolishing at the hands of the Minnesota Wild last time out. Minnesota jumped out to a 3-0 lead with a pair of goals :27 apart before adding a 3rd goal less than two minutes later just past the midway point of the opening frame. Anthony Mantha got Detroit on the board less than eight minutes into the 2nd, but that’s where Detroit’s luck ran out. Minnesota responded less than three minutes later and pushed the lead to 5-1 just 1:35 after that. Minny was up 6-1 by the end of the 2nd and added a 7th goal for good measure just before the midway point of the 3rd period. Jimmy Howard took the loss, falling to a paltry 2-23-2 on the year after giving up 5 goals on 17 shots before being pulled in the 2nd period.

The Ottawa Senators will look to build on a 5-2 win over Vancouver last time out. Connor Brown and Bobby Ryan staked the Sens an early 2-0 lead with a pair of goals :31 apart and the lead would hold until late in the 2nd when Vancouver pulled a goal back late in the period. Rudolfs Balcers made it a 3-1 game just :14 into the 3rd, but Vancouver would pull a goal back just eight minutes later. Ryan would lock up the win for Ottawa, striking twice in :19 to complete his hat trick, the latter coming on an empty-net. Marcus Hogberg got the win to improve to 4-7-8 on the year after stopping 32 of 34 shots faced in the winning effort.

Don’t look now, but Ottawa is actually showing some signs of life and that they can play competent hockey at home. I’m still not sure what to say about Detroit in all honesty, as like I’ve said, they can barely win against anyone not named the Montreal Canadiens. Ottawa hasn’t been great in their own right, but the Senators play their best by far at home and I’ll take my chances with Ottawa to pick up the win in regulation to get the price down.