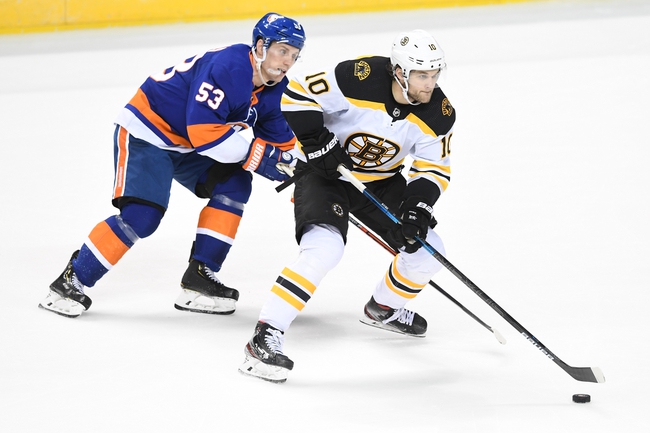 The Boston Bruins and the New York Islanders meet in a Metropolitan division tilt in NHL action from the Nassau Coliseum on Saturday afternoon.

The Boston Bruins will look to build on a 4-3 win over the Dallas Stars in their last outing. Dallas opened the scoring with just over two minutes to go in the 1st period before Charlie Coyle tied the game at one in the dying seconds of the opening period. Brad Marchand and Nick Ritchie pushed the lead to 3-1 with a pair of goals 1:17 apart late in the 2nd. Dallas pulled a goal back early in the 3rd but David Pastrnak restored the two goal lead just 2:35 later. Dallas made things interesting at 4-3 with just over two minutes to play, but that’s as close as the Stars would get as Boston slammed the door shut the rest of the way for the win. Jaroslav Halak got the win to improve to 17-6-6 on the year after stopping 31 of 34 shots faced in the winning effort.

The New York Islanders will look to rebound from back-to-back losses after a 3-2 overtime loss to St. Louis last time out. Jordan Eberle opened the scoring just after the eight-minute mark of the opening period before Jean-Gabriel Pageau doubled the lead with just over three minutes to go in the 1st. St. Louis pulled a goal back late in the 1st period and tied the game at two late in the 3rd, eventually forcing OT where the Blue completed the comeback with just under two minutes to go in the extra period. Thomas Greiss took the OT loss, falling to 16-8-3 on the year after allowing 3 goals on 32 shots faced in the losing effort.

I considered the Isles as a mild home dog here, but the problem is that New York is stumbling right now and have struggled to step up in competition as of late as the Isles have been getting killed in the underdog role as of late. Boston’s just been playing the much better hockey side by side, and when you add in the amount of success the Bruins have had against the Islanders in recent years, the price, even on the road, isn’t that bad. I’ll lay the juice with Boston in this one.