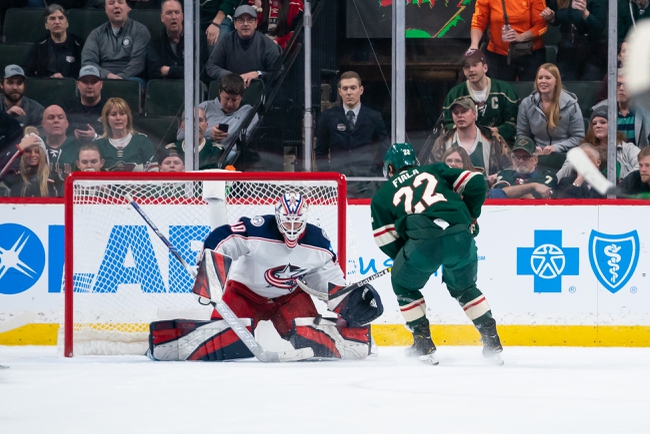 Where to Watch: FS-North, FS-Ohio Stream live sports and exclusive originals on ESPN+. Sign up now!

The Minnesota Wild and the Columbus Blue Jackets meet in NHL action from the Nationwide Arena on Friday night.

The Minnesota Wild enter this game fresh off the heels of a 7-1 dismantling of Detroit last time out. Ryan Hartman, Ryan Donato and Matt Dumba quickly shoved the Wild ahead 3-0 with Hartman’s and Donato’s markers coming :27 apart followed by Dumba’s goal just 1:53 after that. Detroit got on the board just before the eight-minute mark of the 2nd, but Dumba would cancel that goal out just 2:57 later and Jared Greenway made it 5-1 just 1:35 after that. Kevin Fiala pushed Minny’s lead to 6-1 later in the 2nd before Eric Staal added the 7thgoal for good measure just before the halfway mark of the 3rd period. Alex Stalock got the win to improve his record to 17-9-4 on the year after stopping 25 of 26 shots faced in the winning effort.

The Columbus Blue Jackets have revenge on their minds after a 5-4 loss to these same Minnesota Wild from their last outing. Minnesota took the lead just 1:34 into the game before Nick Foligno tied the game at one with just under seven minutes to go in the opening frame. The Wild took the lead in the last minute of the 1st and had a 4-1 lead by the end of the 2nd period. Emil Bemstrom and Pierre-Luc Dubois scored 1:21 apart to cut the deficit to 4-3 but the Wild would restore the two-goal cushion just before the midway point of the 3rd period. Zach Werenski made it a 5-4 game with just over three minutes to go, but that’s as close as Columbus got as the Wild shut the door on a comeback attempt the rest of the way. Matiss Kivlenieks took the loss, falling to 1-1-2 on the year after giving up all 5 goals on 40 shots faced in the losing effort.

I get that the Wild haven’t been all that great on the road but the Wild have been playing a lot better than Columbus lately, and I’m not crazy about having to lay juice with the Blue Jackets who have lost 9 of their last 10 games, even at home and with a rest advantage. I just think there’s a lot of value to be had with Minnesota who didn’t have to exhaust a ton of energy against Detroit on Thursday, so I’ll take a stab at the Wild and the plus money here.