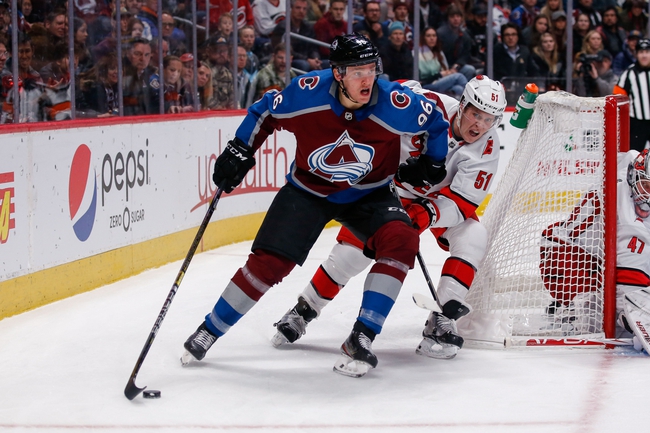 Where to Watch: Altitude, FS-Carolina Stream live sports and exclusive originals on ESPN+. Sign up now!

The Colorado Avalanche and the Carolina Hurricanes meet in NHL action from the PNC Arena on Friday night.

The Colorado Avalanche will look to add to their current four-game winning streak after a 3-2 win of Buffalo last time out. Gabriel Landeskog opened the scoring for the Avs with just under six minutes to go in the opening period, but Buffalo would tie the game at one just 1:57 later. Martin Kaut would restore Colorado’s lead just over seven minutes into the 2nd before Buffalo tied the game at two again with just over five minutes to go in 2nd period. J.T. Compher would give Colorado the lead for good with just over eight minutes to go, and Buffalo wouldn’t be able to respond for a 3rd time as the Avs held on for the win the rest of the way. Pavel Francouz g0t the win to improve to 17-6-3 on the year after stopping 31 of 33 shots faced in the winning effort.

The Carolina Hurricanes will try to regroup after a 4-1 loss to Dallas last time out. Dallas opened the scoring less than a minute into the game before Dallas surged ahead 3-0 late in the 1st with a pair of goals 1:49 apart. Sebastian Aho would pull a goal back for Carolina, but Dallas would respond later in the 2nd period to restore the three-goal cushion. Despite Carolina outshooting Dallas in all three periods, including 18-1 in the 3rdperiod, the ‘Canes wouldn’t get any closer as Dallas held on for the road win. Alex Nedeljkovic took the loss, falling to 0-1-0 on the year after giving up all 4 goals on 16 shots faced in the losing effort.

I’m still trying to understand this line, and the more I look at it, the more I’m talking myself onto Colorado. Carolina’s been solid at home for much of the year, but the Hurricanes are still dealing with injuries to their top two goaltenders and while Nedeljkovic settled in, it was clear that he hadn’t recovered from giving up a goal in the opening minute against Dallas and maybe he can get settled here, but I’m not buying into it. Colorado’s on a roll again right now, and the Avs, home or away, aren’t the kind of team you want to bump into as a young goaltender still getting your feet wet in the big leagues after being thrust into the position. I just think there’s a ton of value to be had with Colorado who should be able to take advantage of Carolina’s disadvantage in goal here, so give me the Avs and the plus money.