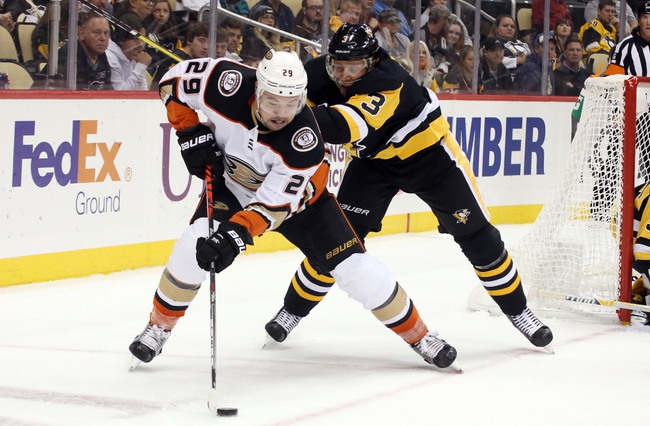 The Pittsburgh Penguins and the Anaheim Ducks meet in NHL action from the Honda Center on Friday night.

The Pittsburgh Penguins will be out to snap a four-game losing streak after a 2-1 loss to the Los Angeles Kings last time out. Los Angeles opened the scoring less than three minutes into the game and the Kings carries that lead into the 2nd where they doubled the lead in the last minute of the middle period. Bryan Rust pulled a goal back just under seven minutes into the 3rd, but that’s as close as Pittsburgh got despite outshooting the Kings 14-8 in the 3rd. Los Angeles would hold on as Pittsburgh couldn’t find a game-tying goal the rest of the way. Tristan Jarry took the loss, falling to 20-10-1 on the year after allowing both goals on 22 shots faced in the losing effort.

The Anaheim Ducks will look to build on a 4-3 overtime win over Edmonton last time out. Sonny Milano opened the scoring just under six minutes into the game before Nicolas Deslauriers doubled Anaheim’s lead with just under seven minutes to go in the opening frame. Edmonton pulled one back with the lone goal of the 2nd period, and Edmonton tied the game at two just over four minutes into the 3rd period. Adam Henrique restored Anaheim’s lead with just over seven minutes to go in the 3rd before Edmonton tied the game again with less than five minutes to go in regulation. The game eventually needed OT, where Sonny Milano broke the deadlock, scoring just over two minutes into the extra period, giving Anaheim the win and the extra point that goes with it. John Gibson got the win to improve to 18-24-5 on the year after allowing 3 goals on 32 shots faced in the winning effort.

The plus money is worth a look with Anaheim at home, but the Ducks have had issues with sustaining success and stringing wins together. Pittsburgh is struggling and I’m not normally trying to lay juice with teams on four-game losing skids, but there’s no denying that the Penguins are too good to keep losing like this and I think that the Pens bounce back here against a Ducks team with nothing much more than pride to play for at this point. I’ll side with Pittsburgh in regulation to get a more favorable price on the Penguins here.