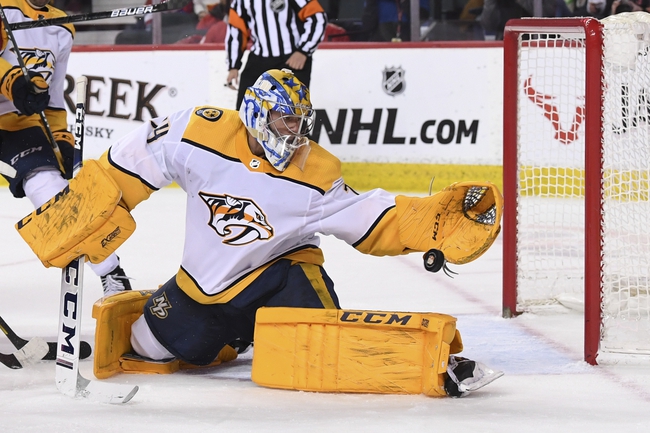 Where to Watch: FS-Tennessee Stream live sports and exclusive originals on ESPN+. Sign up now!

The Calgary Flames and the Nashville Predators meet in NHL action from the Bridgestone Arena on Thursday night.

The Calgary Flames will look to build on back-to-back wins after a 5-2 win over Boston last time out. Matthew Tkachuk opened the scoring for Calgary with the lone goal of the opening period with just over eight minutes to go in the opening frame before Boston tied the game at one just after the midway point of the 2nd period. Sean Monahan pushed the Flames ahead 3-1 with a pair of goals 1:12 apart later in the 2nd period before the Bruins cut back into that lead, making it a 3-2 game with just over six minutes to go. Mikael Backlund would add an insurance marker with just 1:30 to go and an empty-netter :41 after that to secure the win and send Boston back with a rare regulation loss at home. David Rittich got the win to improve to 24-15-5 on the year after stopping 26 of 28 shots faced in the victory.

The Nashville Predators will look to build on back-to-back wins after a 3-2 win over Ottawa last time out. Ottawa opened the scoring just over four minutes into the game before Colin Blackwell tied the game at one for Nashville just :20 later. The Sens restored the lead late in the 1st, but Ryan Ellis and Viktor Arvidsson pushed Nashville in front 3-2 just before the midway point of the 2nd period. Despite Ottawa’s best efforts, the Senators wouldn’t find a game-tying goal over the entire 2nd half of the game as Nashville sent Ottawa back empty-handed with yet another road loss to show for their troubles. Juuse Saros got the win to improve to 13-10-4 on the year after stopping 33 of 35 shots faced in the winning effort.

I like what the Predators have been doing lately, as Nashville’s really stepped up their play and picked up wins over the Blues, the Islanders and these same Calgary Flames so far this month. However, it’s going to be a big step up in competition from wins over a slumping Blue Jackets team and an Ottawa team that’s terrible this season especially on the road, to going up against a Calgary team that’s red hot on the road and just took down arguably the best home team in the NHL so far this season by beating Boston. The Flames have also had a ton of success in this matchup and the underdog has pretty much owned the play between the two, so I’ll take my chances with Calgary and the plus money here.