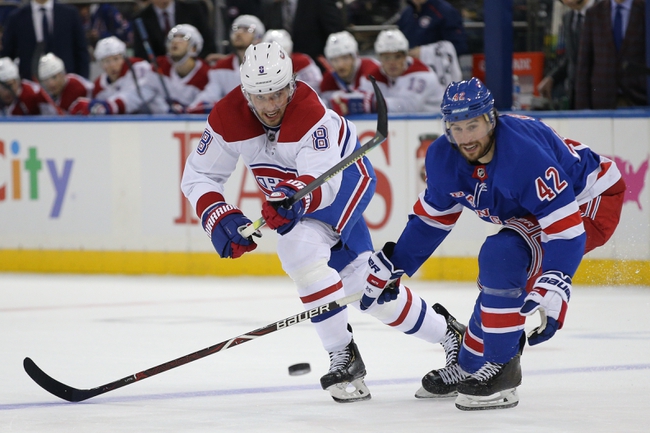 The New York Rangers and the Montreal Canadiens meet in NHL action from the Bell Centre on Thursday night.

The New York Rangers will look to add to their current four-game winning streak after a 4-3 overtime win over the Islanders last time out. Artemi Panarin opened the scoring with just under three minutes to go in the first for the Rangers before Gregg McKegg doubled the lead just before the eight-minute mark of the 2nd. The Islanders got on the board late in the 2nd but Brett Howden would restore the two-goal lead just before the midway point of the 3rd period. The Isles would pull one back with just under six minutes to go and would tie the game at three in the dying seconds of the 3rd, eventually forcing overtime. Mika Zibanejad helped New York pick up the win, burying the overtime winner just :28 into the extra period. Alexander Georgiev got the win to improve to 15-12-1 on the year after stopping 42 of 45 shots faced in the winning effort.

The Montreal Canadiens will look to rebound from a 4-3 overtime loss to Vancouver in their last outing. Montreal jumped out to a 2-0 lead thanks to goals from Paul Byron and Shea Weber just 1:24 apart early in the 1st before Vancouver pulled a goa back later in the opening period. The Canucks would tie the game at two with the lone goal of the 2nd period before Jordan Weal re-established Montreal’s lead less than a minute into the 3rd. Vancouver would tie the game at three just over five minutes later, and neither side could break the deadlock the rest of the way in regulation, so it was off to overtime where Vancouver potted the game-winner less than two minutes into the extra period. Carey Price took the loss, falling to 26-22-6 on the year after giving up all 4 goals on 34 shots faced in the losing effort.

This line makes no sense to me. The Rangers are playing heads and shoulders better hockey than Montreal right now as the Canadiens are watching their playoff hopes vanish right in front of their eyes. The Rangers continue to get no respect despite winning games left and right, but hey that’s better for us. I’ll take the Rangers and the plus money in this one.