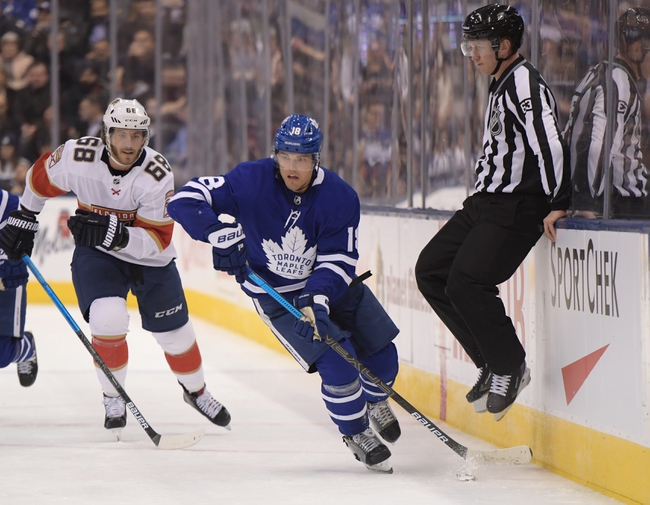 The Toronto Maple Leafs and the Florida Panthers meet in an Atlantic division matchup in NHL action from the BB&T Arena on Thursday night.

The Toronto Maple Leafs will look to build on a 4-3 win over the Tampa Bay Lightning in their last outing. Tampa Bay took the lead just before the midway point of the opening period befkre Jake Muzzin tied the game at one and John Tavares gave Toronto the lead less than four minutes later. Tampa Bay tied the game again with just over eight minutes to go in the 2nd, but Tavares would pot his 2nd of the game just :31 later and William Nylander would push the lead to 4-2 just 1:56 after that with a goal of the week candidate on the power play. Tampa Bay cut the deficit to 4-3 early on in the 3rd, but despite outshooting Toronto 14-3 in the 3rd, Tampa Bay wouldn’t find the game-tying goal as Toronto held on for a huge road win. Frederik Andersen got the win to improve to 26-13-6 on the year after stopping 26 of 29 shots faced in the winning effort.

The Florida Panthers will try to build on a 2-1 win over Arizona last time out. Arizona took the lead after 20 minutes of play with the lone goal of the first period coming with just under six minutes to go in the frame before Frank Vatrano tied the game at one with just under nine minutes to go in the 2nd period. Mike Hoffman gave Florida the lead on the power play just under nine minutes into the 3rd period, and despite Arizona outshooting Florida in all three periods, including 14-11 in the 3rd, Arizona wouldn’t find a game-tying goal as Florida buckled down and held on for the win. Sergei Bobrovsky ended up with the win, improving to 23-18-5 on the year after stopping 37 of 38 shots faced in the winning effort.

This game is huge as Toronto currently holds the last spot in the Atlantic division and Florida is right on their tails for this one. However, while the Panthers and the cheaper price at home is tempting given their 13-7 combined score in two wins against Toronto this year, I think the fact that Toronto is favored here speaks volumes. That win over Tampa Bay was a gutsy win that Toronto desperately needed to prove that they are for real and that they’re a better team than how they’ve been playing lately. I think the Leafs realize the magnitude of this game, and all hands will be on deck for this one. Give me the Leafs in a statement win on the road here.