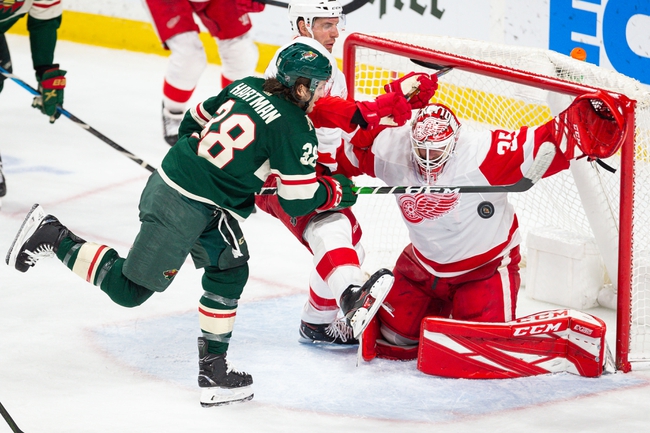 The Minnesota Wild and the Detroit Red Wings meet in NHL action from Little Caesars Arena on Thursday night.

The Minnesota Wild will look to build on a 5-4 win over the Columbus Blue Jackets in their last outing. Eric Staal opened the scoring for the Wild less than two minutes into the game befire Columbus tied the game at one with just over six minutes to go in the 1st. Minnesota re-took the lead in the last minute of the 1st before Mikko Koivu single-handedly put Minny up 4-1 with a pair of 2nd period goals 7:41 apart. Columbus cut the deficit  to 4-3 early in the 3rd before Kevin Fiala restored the Wild’s two goal cushion just before the midway point of the 3rd. The Blue Jackets cut the lead to 5-4 with just over three minutes to go, but that was as close as Columbus would get as Minnesota slammed the door shut the rest of the way. Alex Stalock got the win to improve to 16-9-4 on the year after stopping 24 of 28 shots faced in the winning effort.

The Detroit Red Wings will be out to snap a three-game losing streak after a 4-1 loss to New Jersey last time out. New Jersey opened the scoring just over a minute into the game before taking a 3-0 2nd period lead with a pair of goals 2:47 apart. Valtteri Filppula got the Red Wings on the board just before the midway point of the 3rd, but that’s as close as Detroit ended up getting as the Devils responded just four minutes later with a back-breaking 4th goal that Detroit couldn’t come back from. Jonathan Bernier ended up with the loss to fall to 13-20-2 on the year after giving up all 4 goals on 31 shots faced in the losing effort.

The Wild have historically struggled against the Red Wings, but this is a historically bad Detroit team that just can’t find wins against any team not named the Montreal Canadiens. Minnesota’s actually been fairly decent on the road as of late, and Detroit just can’t get a break regardless of where they play. I’ll side with Minnesota on the puck line here as Detroit gets beat up on again.